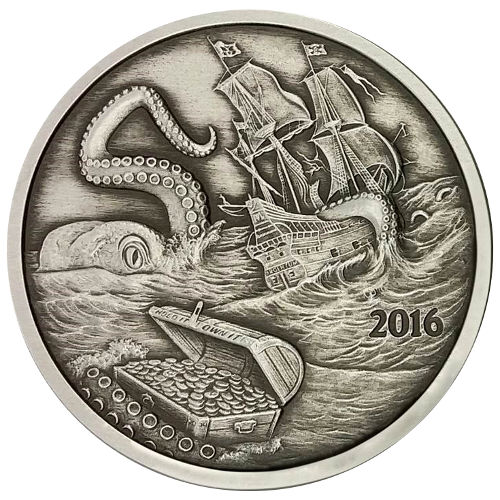 The kraken was the most fearsome mythical creature of the ancient world. Poseidon himself often didnt strike the same level of fear in the hearts of sailors as the kraken, for the beast would mercilessly destroy ships and sailors in the most gruesome manner possible. Today, the 2016 1 oz Silverbug Island Antique Finish Kraken Round is available for purchase from JM Bullion.

The first record written record of the kraken came from Viking lore, and not that of the ancient world. Viking sailors traveling between the coast of Norway and Greenland feared a gruesome death via kraken attack. The beasts were rumored to be as much as 40 to 50 feet in length, and could destroy any ship of the day.

Each of the 2016 1 oz Silverbug Island Kraken Rounds in this product listing features an antique finish. Usually a feature of coins and rounds in circulation for decades, modern techniques allow mints to give new products an antique finish that adds warm, subtle tones to the design field of the coin.

The obverse of these silver rounds bears the image of a kraken attacking a galleon. The massive ship is no match for the beast, whose body alone is the size of the ship. In the foreground of the design, you can see the kraken multitasking as one of its tentacles reaches out to capture a floating chest of silver coins.

North American Mint strikes all Silverbug rounds for the community on Reddit, and offers them in BU and proof versions in addition to these antique finish rounds.

Please feel free to reach out to JM Bullion with your questions at 800-276-6508. Were also available online using our live chat and email features.