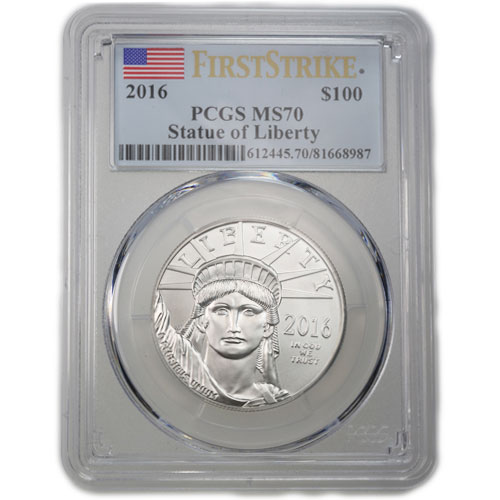 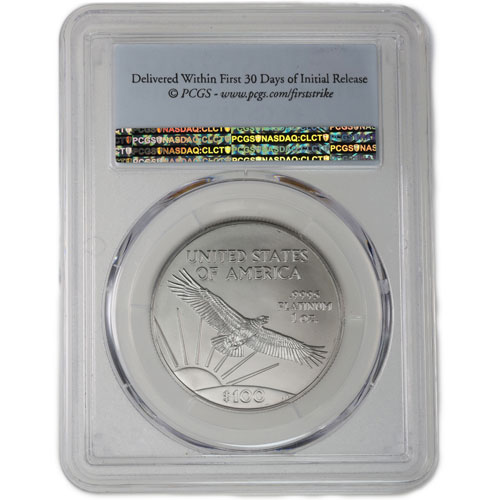 The American Platinum Eagle coin is the platinum version of the nations official coin program. Struck since 1997, these coins have experienced extreme ups and downs in recent years as the availability and popularity of platinum have ebbed and flowed. Today, the 2016 1 oz American Platinum Eagle Coin is available as a perfect specimen from JM Bullion.

When the PCGS issues a coin a perfect grade it significantly increases the value of that product beyond its face value and metal content. An MS70 coin exhibits its full, original mint luster and features no detracting flaws of any kind on its surfaces.

American Platinum Eagle coins were released for the first time in 1997 with a bullion, proof, and uncirculated version of the coin available to investors and collectors. While the US Mint has strived to produce the coins as much as possible, economic conditions sometimes interfere.

For example, these 2016 1 oz American Platinum Eagle coins mark the return of the coin to production after the mint failed to procure enough platinum planchets for bullion production in 2015. Bullion versions of the coin were also out of production from 2009 to 2013, returning in 2014 before the 2015 outage.

The reverse side of the coin features an image from former US Mint engraver and artist Thomas D. Rogers. His creation is known as Eagle Soaring Above America, and has featured on the reverse of the bullion coin since 1997. It was also used on the proof coin in 1997, but that series has a new design on its reverse every year.

If you have questions, JM Bullion customer service associates have answers. Please feel free to call us at 800-276-6508, connect with us online using our web chat, or email us with your questions.