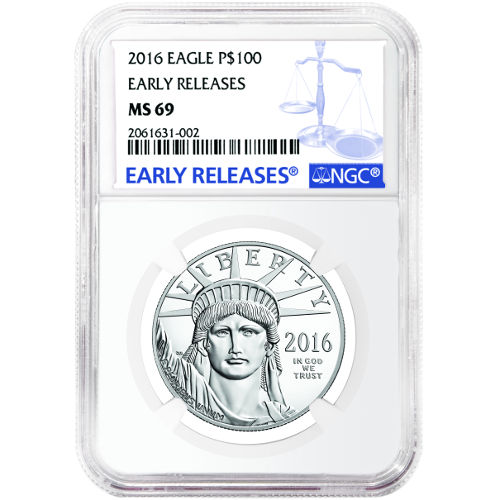 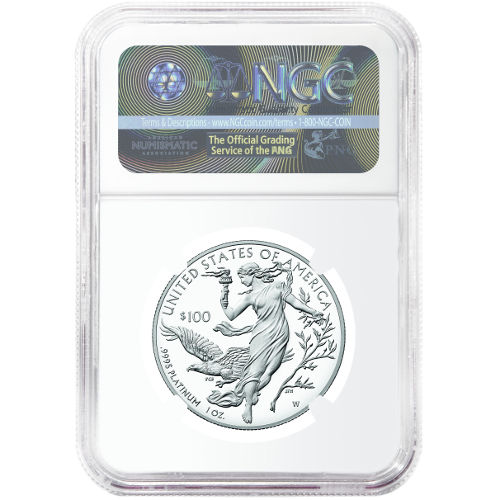 These 2016 1 oz American Platinum Eagle coins are graded MS69 by the NGC. Considered near-perfect specimens, these coins still maintain full, original mint luster but do feature detracting flaws. An MS69 coin has a maximum of two minor flaws, such as miniscule hairlines. They exist outside the primary focal area and are only visible under magnification.

A coin with an Early Release designation is one that was received for certification within a set timeframe. Specifically, these coins were received by the NGC or an approved third-party depository within the first 30 days of the release date set by the US Mint.

American Platinum Eagle coins are available in bullion and proof versions, with the proof version being the only US Mint bullion coin program to feature a new reverse design each year.

On the obverse of the 2016 1 oz American Platinum Eagle coin is the image of Lady Liberty. Inspired by the Statue of Liberty, this image focuses on her face as she gazes out into the distances. It was created in 1997 by John Mercanti, who at the time served as Chief Engraver of the United States Mint.

The reverse of the American Platinum Eagle coins in this bullion release features the American bald eagle as it soars over the sun and the nation of America. Designed by Thomas D. Rogers, this design is the only one to have featured on both the proof and bullion version of the coin, occurring in 1997.

If you have any questions about these 2016 1 oz American Platinum Eagle coins, please dont hesitate to ask. JM Bullion associates are available at 800-276-6508, online using our live web chat, and via our email address.