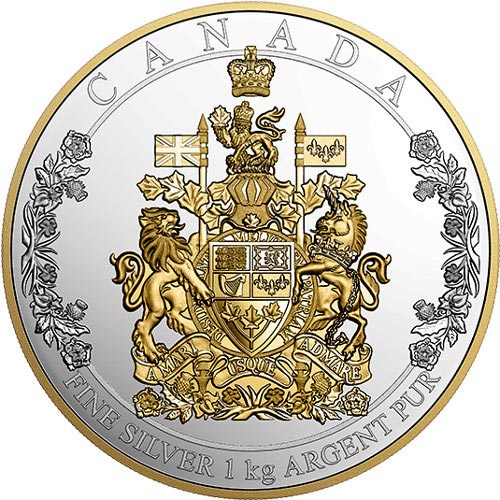 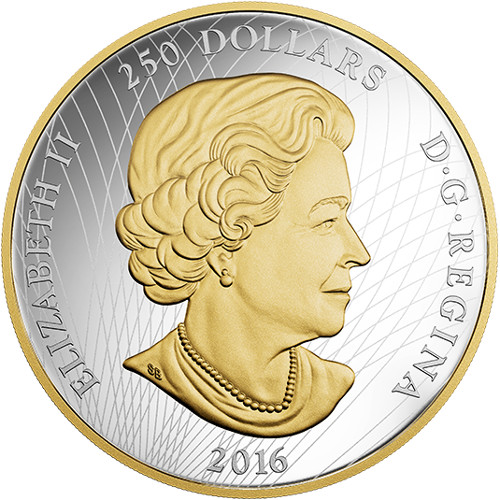 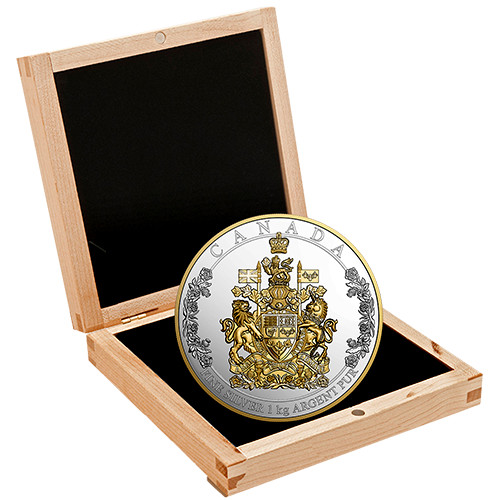 The past few years have featured numerous releases from the Royal Canadian Mint celebrating major milestones for the nation. In 2017, the country celebrates its 150th anniversary, and in 2016 it honored the 95th anniversary of its official coat of arms. Right now, the 2016 1 Kilo Proof Canadian Silver Arms of Canada coin is available from JM Bullion.

The image on the reverse side of the 2016 1 Kilo Proof Canadian Silver Arms of Canada coin was created by Cathy Bursey-Sabourin and Fraser Herald at the Canadian Heraldic Authority. The center of the design is a shield, with upper quadrants containing the three royal lions of England, as well as the royal lion of Scotland, the harp of Ireland, and the royal fleurs-de-lis of France.

At the bottom of the design is a sprig of three maple leaves, a truly iconic Canadian symbol. On either side of the shield, imagery of Canadas roots continue with a lion on the left holding the Union Jack flag of the United Kingdom, while a unicorn on the right (royal symbol of Scotland) holds the royal flag of France.

On the reverse of the 2016 1 Kilo Proof Canadian Silver Arms of Canada coin youll find the nations coat arms, complete with selective gold plating on the coat of arms itself and around the rim of the coin. King George V proclaimed the coat of arms for Canada on November 21, 1921.

The obverse of the coin feature the right-profile portrait of the current sovereign monarch of the United Kingdom, and Canada, Queen Elizabeth II. Her Majestys effigy was created in 2003 by Canadian artist Susanna Blunt.

Founded in 1908, the Royal Canadian Mint had numerous purposes at the time of its founding. The newly sovereign nation needed its own minting capacity, separate from that of the Royal Mint in London. Also, the increase in gold and precious metals from the Yukon Territories were processed by the mint.

If you have any questions, please dont hesitate to ask. JM Bullion associates are available on the phone at 800-276-6508, online via our live web chat, and through our email address.