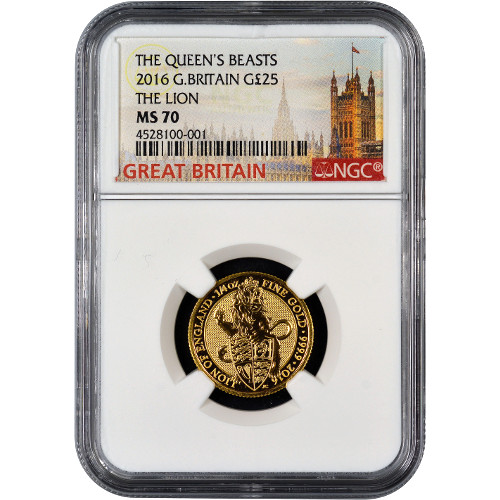 British Queens Beast coins immediately captured the attention of investors and collectors looking to buy gold. The 10 designs in the series offer intriguing potential for any serious collector, and the .9999 pure gold content is ideal for investors. Today, 2016 oz British Gold Queens Beast Lion Coins are available to you from JM Bullion with perfect certifications from the NGC.

Jody Clark became the youngest Royal Mint engraver to ever create a portrait of Her Majesty Queen Elizabeth II when he unveiled the latest design of the monarch for United Kingdom coinage. His 2015 design replaces that of Ian Rank-Broadley, which has been in use since 1998.

Each 2016 oz Gold Lion coin available to you here today is considered a perfect specimen. Coins with a Mint State 70 grade from the NGC exhibit full, original mint luster and lack all detracting flaws of any kind on the surface areas of the coins.

The obverse of the British Gold Queens Beast Coin you’ll find Clark’s all-new portrait of Her Majesty Queen Elizabeth II. Captured in right-profile relief, Her Majesty’s portrait is surrounded by engravings of her name, the year of issue, and the face value of the coin in Pound Sterling.

The reverse of the 2016 1/4 oz British Gold Queens Beast Coin includes the fearsome image of the Lion of England. It is depicted standing behind the Royal Coat of Arms, with one paw holding the shield and the other raised, poised to strike back at the nation’s enemies.

The Royal Mint was originally founded in the early 9th century as the London Mint. For more than one-thousand years it has coined official currency for the crown, and today produces the official Pound Sterling of the United Kingdom.

Please direct your questions to JM Bullion at 800-276-6508. Our customer service team is also available online using our live chat and email features, and youll always find the latest spot price of gold on our website!