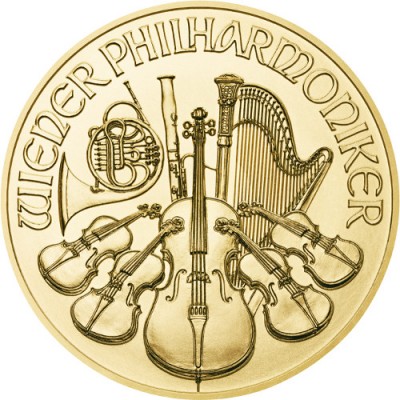 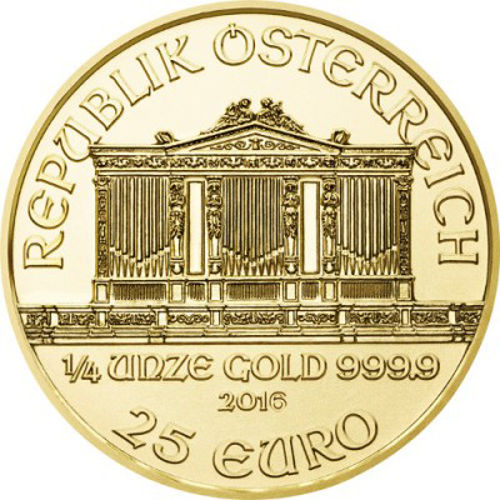 The Austrian Gold Philharmonic coin was introduced originally in 1989, and was available only in the popular 1 oz weight and this oz weight. Other fractional weights in the program were introduced in a staggered schedule over the course of 25 years. A 1/10 oz coin was added in 1991, followed by a oz in 1994 and the 1/25 oz in 2014 on the programs 25th anniversary.

All Gold Philharmonic coins feature designs from Thomas Pesendorfer, who used the Vienna Philharmonic Orchestra as a source of inspiration. The orchestra was founded in 1842, and plays at the Musikverein Concert Hall in the Inner Stadt neighborhood of Vienna, the national capital.

On the reverse face of all coins is a cornucopia of instruments played by members of the orchestra in the course of a performance. This includes the French horn, bassoon, cello, violin, and harp. The words Wiener Philharmoniker are engraved above the design on this face.

The obverse bears the image of the Musikverein Concert Hall, along with engravings of Republik Osterreich, 1/4 Unze Gold 999.9, and the coins year of issue and face value in Euros.

All engravings on the Austrian Gold Philharmonic coin are in German, the native tongue of most Austrians. The face value of these coins has been listed in Euros since the adoption of the common currency of the Eurozone in 2002, but the coins are not considered legal tender outside of Austria.

If you have any questions about these coins, please feel free to reach out to JM Bullion. Our associates are available at 800-276-6508, online using our live chat, or via email.