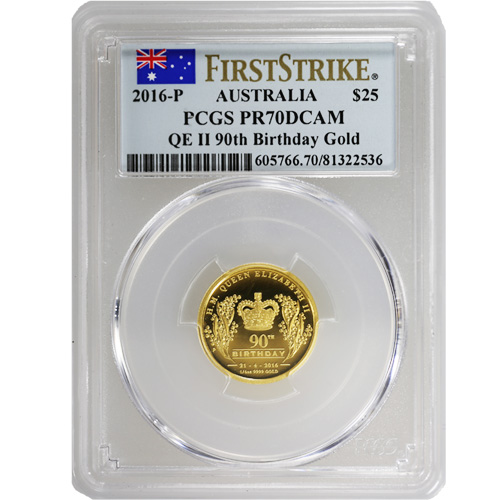 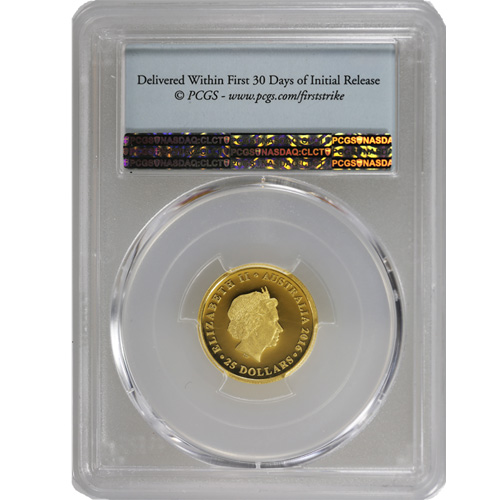 Queen Elizabeth II is England’s longest-reigning monarch in history. She is not only one of the world’s longest-reigning monarchs, but she is also one of the longest-lived. Her record-setting reign began in 1952 at the age of 25 and continues in the 21st century. In 2016, the Perth Mint honored the Queen’s longevity with a commemorative 90th birthday gold coin release. Right now, 2016 1/4 oz Australian Queen Elizabeth II 90th Birthday Gold Coins are available to purchase online at JM Bullion in perfect condition.

Each of the 2016 1/4 oz Australian Queen Elizabeth II 90th Birthday Gold Coins available in this listing comes with a perfect certification. Issued to mark the 90th birthday of England’s monarch, these proof gold coins earned a PR70 grade from the PCGS. Coins in this condition exhibit full, original mint luster and have no detracting flaws. The included DCAM designation indicates the coins have deep-cameo-proof visuals. This includes strong, frosted design elements and deeply-mirrored, clear fields. First Strike coins are those received for grading within 30 days of release from the mint.

Queen Elizabeth II features on the obverse side of 2016 Australian Queen Elizabeth II 90th Birthday Gold Coins. This effigy of the Queen was created in 1998 by Ian Rank-Broadley and featured on the coinage of the Royal Mint from 1998 to 2015. It graced Australian coins from 1999 to 2018, and is still used on the coinage of countless Commonwealth nations.

St. Edwards Crown is depicted in the reverse design of the 2016 1/4 oz Queen Elizabeth II 90th Birthday Gold Coins. The St. Edwards Crown is one of the oldest pieces of the Crown Jewels and was first used in the 9th and 10th centuries in England. The crown is worn only once by the monarch on the occasion of his or her coronation ceremony.