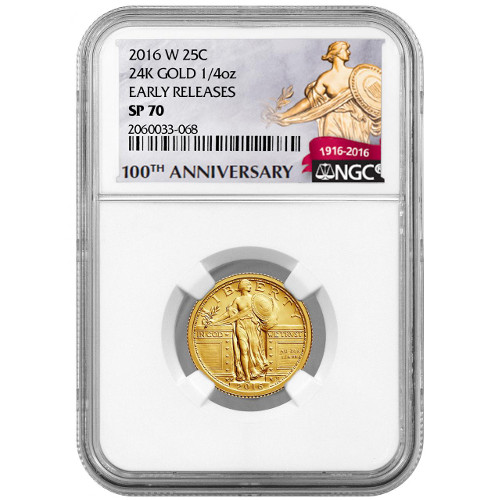 The United States Mint is proud to offer a three-coin series of 24-karat gold coins honoring the centennial of some historic US currency designs from Adolph A. Weinman and Hermon Atkins MacNeil. The second release in the series commemorates the US quarter design used from 1916 to 1930. Right now the 2016 oz American Gold Standing Liberty Quarter Coin is available as a perfect specimen from JM Bullion.

Prior to 2016, the United States Mint had only released two 24-karat gold coins in its 224-year history. With the release of the 2016 American Gold Centennial Coins, the US Mint has more than doubled its .9999 pure gold offerings with the release of three commemorative gold coins containing this purity level.

Each 2016 oz American Gold Standing Liberty Quarter in this listing has a perfect Specimen Proof 70 grade from the NGC. Coins in this condition feature full, original luster from the mint, a mirrored finish, and lack all detracting flaws. As an Early Release designation, each coin was received by the NGC within the opening 30-day release period set by the US Mint.

The coins obverse side features the image of Standing Liberty, which depicts Liberty with chain-mail armor and a shield as she stands guard in the gap of a wall for the nation. Engravings include Liberty, In God We Trust, and 2016.

On the reverse of the 2016 oz American Gold Standing Liberty Quarter youll find the American bald eagle in midflight, with its wings spread wide. Engravings added to the original design include AU 24K oz.

Please feel free to contact JM Bullion with any questions at 800-276-6508, or reach out to us online using our live web chat and email features.