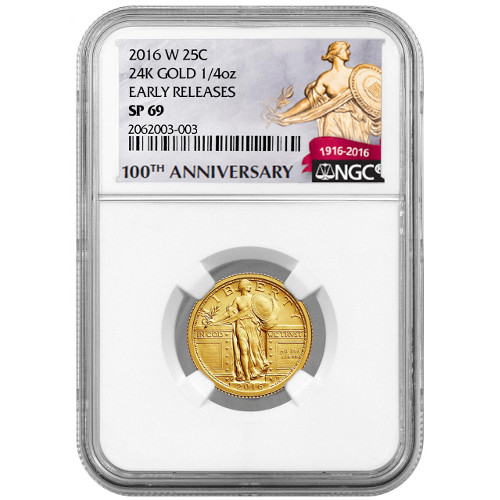 The United States Mints centennial celebration of some of the nations most famous coin designs from the 20th century rolls on with the release of the second coin in the series. The 2016 American Gold Centennial Coins honor three of the most beloved designs from the mint, all of which debuted on currency in 1916. The 2016 oz American Gold Standing Liberty Quarter coin is available as a near-perfect specimen now on JM Bullion.

Introduced in 1916, the Standing Liberty Quarter from Hermon Atkins MacNeil replaced an 1892 design from then-Chief Engraver of the United States Mint, Charles E. Barber. All of Barbers designs were replaced throughout the early 20th century as the federal government sought to modernize the design of the countrys circulation currency.

MacNeils Standing Liberty design featured Lady Liberty standing with a shield in her hand, stationed between a gap in a wall. The symbolism was indicative of her readiness to protect the country, and by default the countrys readiness to defend itself. MacNeils original design featured a bare-chested Liberty, but the US Mint changed his design to give her a chain-mail chest covering.

Each 2016 oz American Gold Standing Liberty Quarter Coin in this listing earned an SP69 grade from the NGC. Considered near-perfect coins, these specimens have a proof-like appearance with a mirrored finish; exhibit full, original mint luster, and include a maximum of two minor detracting flaws. The Early Release designation is reserved for coins received for certification by the NGC within the first 30 days of the release date set by the US Mint.

On the obverse is the refined Standing Liberty design from MacNeil, along with the same engravings from the original coins. The reverse features his depiction of American bald eagle in flight from left to right on the coins surface. An addition to the engravings marks the metal content, purity, and weight of this particular product.

If you have any questions about the new 2016 American Gold Centennial Coins, or the 2016 oz American Gold Standing Liberty Quarter coin, please contact JM Bullion. Our associates are available at 800-276-6508, online using our live web chat, or via our email address.