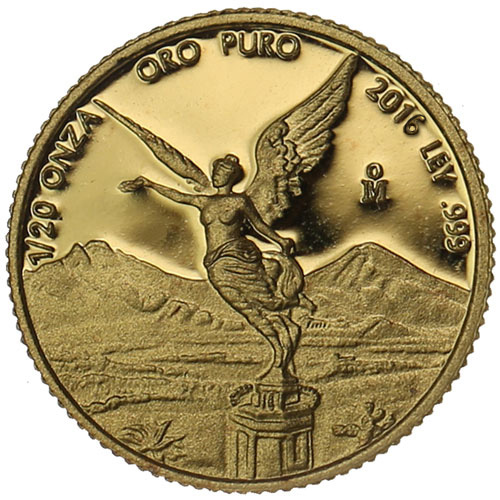 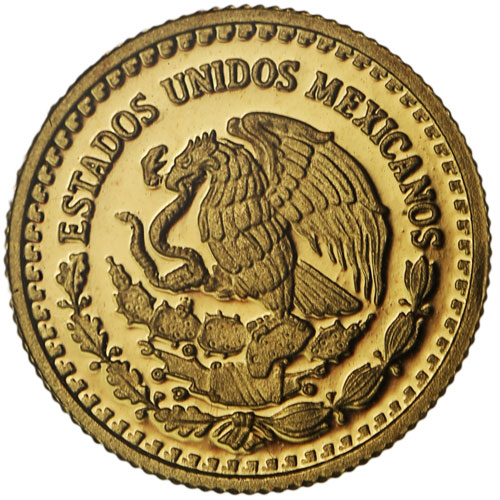 Mexican Libertad coins were introduced in 1982, with a silver version available following the release of the gold bullion coin. While silver proof coins were made available early on in the history of this program, the Proof Mexican Gold Libertad coin has only been in production since 2004 in 1 oz and 2005 in all four fractional weights.

The Mexican Libertad series uses the design features originally introduced by the Mexican Mint in 1920 on the Gold Centenario coin that celebrated the nation’s 100th year of independence from its colonial masters, Spain.

On the obverse of the 2016 1/20 oz Proof Mexican Gold Libertad you’ll find the image of Winged Victory. This image is symbolic of the nation’s struggle for independence during an 8-year war with Spain. Her wreath held high in her right hand represents the freedom of self-governance, while the broken chains in her left hand symbolize the broken chains of bondage and servitude.

The reverse of all 1/20 oz Proof Mexican Gold Libertad coins includes the coat of arms for Mexico. The image includes a Mexican bald eagle perched on a cactus arm as it battles with a serpent.

Founded in 1535, the Mexican Mint is the oldest operating mint facility in the Western Hemisphere. Established by Spanish conquistadors, the Mexican Mint served as the primary mint for Spanish colonial coinage through the western world for almost 300 years.

If you have any questions, please don’t hesitate to contact JM Bullion. Our customer service team is available on the phone at 800-276-6508, online through our live web chat, and via our email address.