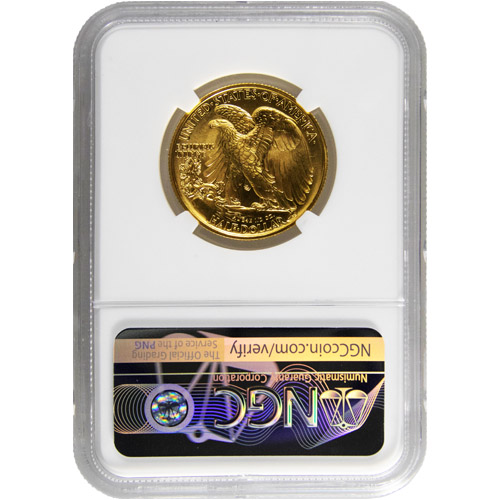 The 2016 release of gold bullion coins at the United States Mint included an impressive American Centennial Series. This three-coin gold collection honored the 1916 overhaul of the Barber Coinage designs for the dime, quarter, and half dollar. Arguably the most popular release in this 24-karat gold series was the American Gold Walking Liberty Half Dollar. Now, certified-perfect 2016-W 1/2 oz American Gold Walking Liberty Half Dollar Coins are available to you for purchase online at JM Bullion.

In 1916, the United States Mint was nearing the end of a push to modernize all of its coin designs. This started in 1905 when President Roosevelt commissioned Augustus Saint-Gaudens to redesign the $10 Gold Eagle and $20 Gold Double Eagle. It ended in 1921 with the release of the Peace Silver Dollar design.

One of the most significant dates during this overhaul came in 1916. The US dime, quarter, and half dollar had featured the same designs created in 1892 by Charles E. Barber for more than 20 years at this point. Though Barber, then the 6th Chief Engraver of the United States Mint, submitted new designs in 1916, images from Adolph A. Weinman would be chosen for the dime and half dollar, with a third from Hermon Atkins MacNeil chosen for the quarter.

Obverse imagery on these 2016-W 1/2 oz American Gold Walking Liberty Half Dollar Coins replicates Weinmans beautiful Walking Liberty design. Used on the half dollar until 1947 and currently featured on the US Mints America Silver Eagle, this beautiful left-profile relief shows Libertys full-length figure walking toward the sun on the horizon.

Reverse designs on the 2016-W American Gold Walking Liberty Half Dollar Coin replicate Weinmans original reverse from the US half dollar. This design shows the bald eagle on a rock ledge with a small sapling in its talons. The bird raises its wings as it sits perched on the rock.

These 2016-W 1/2 oz American Gold Walking Liberty Half Dollar Coins are available in perfect condition. SP70 coins showcase full, original mint luster and have no detractions of any kind present.