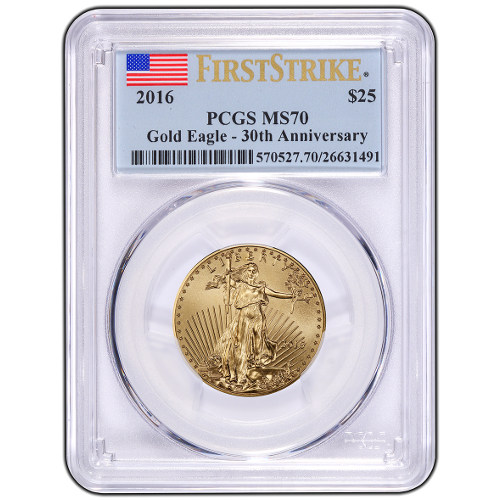 One of the most diverse and popular gold coins in the world is the American Gold Eagle, the official gold bullion coin of the United States. Featuring images of Lady Liberty and the American bald eagle, this coin is symbolic of Americas freedom, power, and majesty. Today, JM Bullion is proud to offer the 30th anniversary 2016 oz American Gold Eagle coin in perfect condition.

The American Gold Eagle coin bears the image of Americas most famous and sought-after coin design on its obverse side. Augustus Saint-Gaudens Lady Liberty image was commissioned in 1905 and created in 1907 by the Irish-American artist and sculptor. His depiction of Liberty is the first in American history to render Liberty in a modern, American styling.

Each 2016 oz American Gold Eagle in this product offering is a perfect specimen in the eyes of the PCGS. These coins have an MS70 grade, which indicates a coin with its full, original mint luster and no detracting flaws of any kind on its surfaces.

On the obverse youll find that historic image of Lady Liberty created by Saint-Gaudens. His original image in 1907 featured Liberty surrounded by 46 stars, as the nation had only 46 states at the time. By the time it appeared on the $20 Gold Double Eagle, two stars were added for Arizona and New Mexico. This coin features 50 stars, reflecting the post-World War II additions of Hawaii and Alaska to the Union.

The reverse of each coin bears Miley Busieks image of a family of bald eagles. In her depiction, a male bald eagle is shown flying over the nest, which holds a group of hatchlings that are watched over carefully by a female eagle.

If you have any questions, please dont hesitate to reach out to us. You can contact JM Bullion at 800-276-6508, connect with us online using our live chat, or email us.