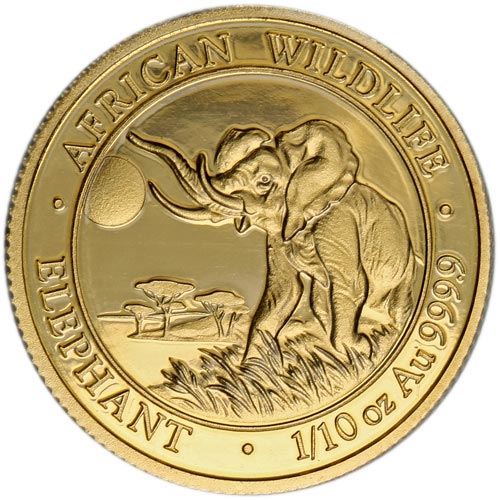 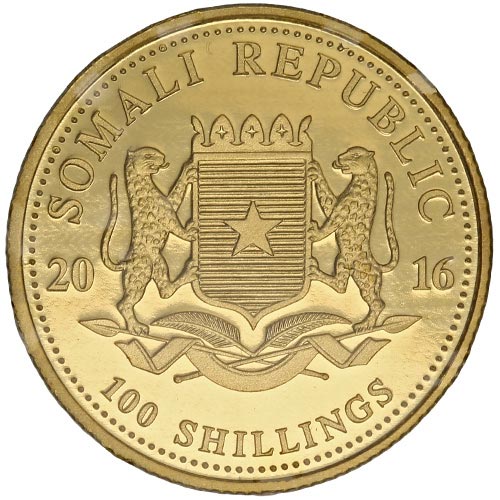 The Somalia Gold Elephant coin is one of many options in the impressive and beautiful African Wildlife collection from the Bavarian State Mint. Available as of 2016 in gold, silver, and platinum with bullion and proof versions, there are few programs as diverse in size and scope as the Somalia Elephant. The 2016 1/10 oz Somalia Gold Elephant coin is available today from JM Bullion.

African Wildlife coins with the African Elephant design actually debuted in 1999 as Zambian Elephant coins, and were issued for that nation for five years through 2003. In 2004, the Bavarian State Mint switched the nation of issue for these now-popular coins to Somalia.

Each year, even though the Zambian Elephant releases, the Bavarian State Mint has featured a new obverse design of the African elephant. The motif always focuses on the elephant in its natural habitat on the African plains, but changes the specific features each year of the design field.

On the obverse of these 2016 1/10 oz Somalia Gold Elephant Coins you’ll find the image of a large, bull elephant as it stands along the banks of a winding river. The elephant and some tall grass dominate the foreground, as the river winds off into the background field toward the rising sun.

The reverse of the Somalia Gold Elephant coins always bears the coat of arms for Somalia. This design includes the nation’s heraldic shield with a single star upon it, similar to the national flag, and features two leopards on either side of the shield with crossing spears beneath it. Engravings on this face include the nation of issue, year of issue, and the coin’s face value.

All 2016 1/10 oz Somalia Gold Elephant Coins in this release are in BU condition. Coins with this condition show no signs of wear and tear, however you may notice minor flaws that range from breaks in the luster and spotted surfaces to contact marks from striking during the production process.

The Bavarian State Mint was founded in Munich in 1158, and is today one of the primary minting facilities for the German nation. It is state owned by the Free State of Bavaria, and the official home of the Somalia Elephant Series of silver, gold, and platinum coins.

We encourage JM Bullion shoppers to contact customer service with questions. Our team members are available at 800-276-6508, online through our live chat, or via our email address.