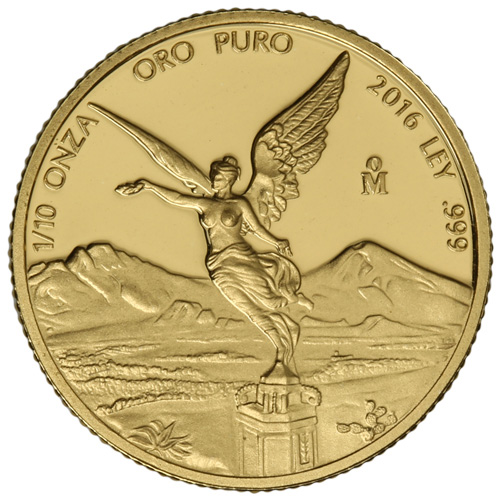 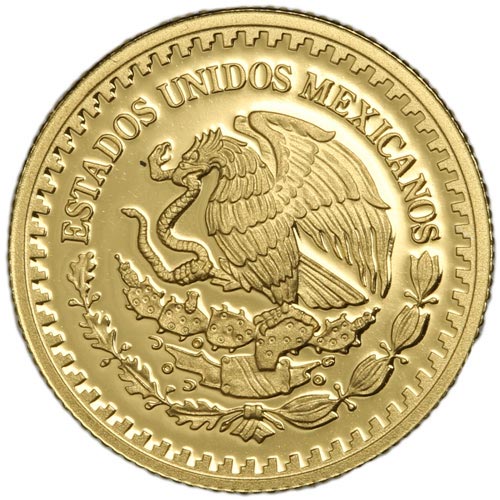 The Mexican Libertad Series, available in gold and silver, was inspired by the Gold Centenario coin from the Mexican Mint. Introduced in 1921 and struck through 1947, these coins included imagery representative of the 100th anniversary of Mexican independence from Spain.

Included on the Centenario was a design of Winged Victory, a figure that represented the struggle for freedom of the Mexican people during their fight for independence that began in the 1820s. When the Mexican Libertad was introduced in 1982, it featured the original Centenario design, but now has a modified, modernized version of that design.

On the obverse of the 2016 1/10 oz Proof Mexican Gold Libertad is a complex design with historical Mexican images. The statue of Winged Victory, a replica of the one in the center of Mexico City, dominates the center of the design field. The background includes the twin volcanic peaks of Popocatepetl and Iztaccihuatl.

The reverse of the 1/10 oz Proof Mexican Gold Libertad has the coat of arms for the nation of Mexico. Included in that coat of arms is the image of a bald eagle battling a serpent, with an engraving of “Estados Unidos Mexicanos,” or the United States of Mexico.

The sovereign mint of Mexico is the Mexican Mint. Founded in 1535, today it is controlled by the federal government of Mexico and it operations are overseen by Banco de Mexico, the official central bank of the country.

Please don’t hesitate to reach out to JM Bullion with questions. Our customer service team is available on the phone at 800-276-6508, online using our live web chat, and via our email address.