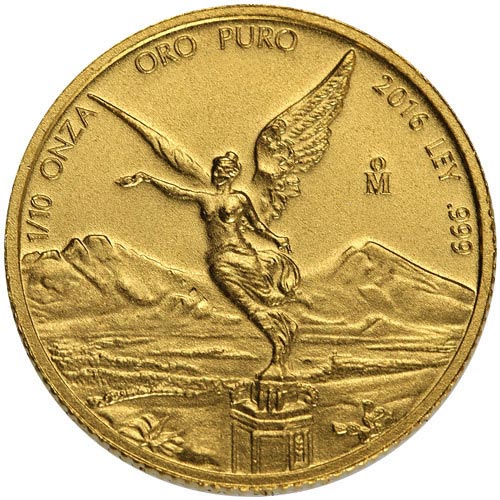 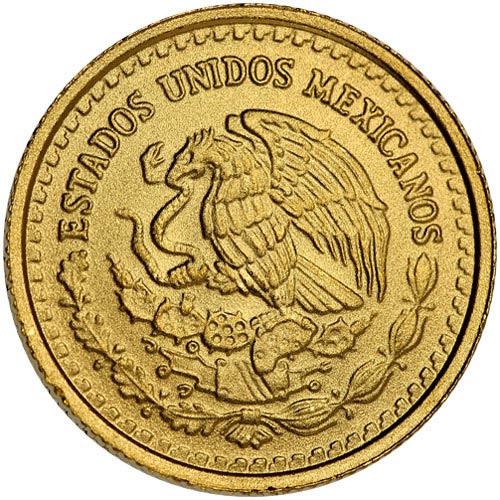 The original gold Centenario coin was struck by the Mexican Mint starting in 1921. The coin was introduced during the nations centennial celebration of its victory over Spain in the War of Independence. Each Centenario featured the images of Winged Victory and the Mexican coat of arms, and had a face value of 50 pesos.

Today, the Mexican Gold Libertad carries on the tradition of that stunning coin design, with Winged Victory on the obverse and the coat of arms on the reverse. Mexican Gold Libertads are available in bullion and proof versions, with these bullion coins available with the greatest regularity in the gold program.

Each of the 2016 1/10 oz Mexican Gold Libertad Coins is available in BU condition. Coins in this condition have no signs of wear and tear, though you may notice a range of minor flaws that include breaks in the luster, spotted surfaces, or contact marks from the production process at the mint.

On the obverse of the 2016 1/10 oz Mexican Gold Libertad coin is the image of the statue of Winged Victory, a representation of Mexico’s victory over Spain in the War of Independence. Her image reflects the nation’s success, with a wreath held aloft in her right hand and the broken chains of servitude in her left hand.

The reverse of the 2016 1/10 oz Mexican Gold Libertad includes the modern coat of arms for Mexico. The 11th depiction of the national seal, this features a bald eagle locked in battle with a serpent on the branch of a cactus, with an engraving of “Estados Unidos Mexicanos” around the top of the seal.

The Mexican Mint was founded in 1535 by Spanish conquistadors intent on exporting the wealth of gold and silver in the New World back to Europe. It served for nearly 300 years as the official coinage facility of the Spanish Empire’s colonies throughout the Western Hemisphere.

We encourage all JM Bullion customers to contact us with questions. Our customer service team is available at 800-276-6508, online using our live chat, or via our email address.