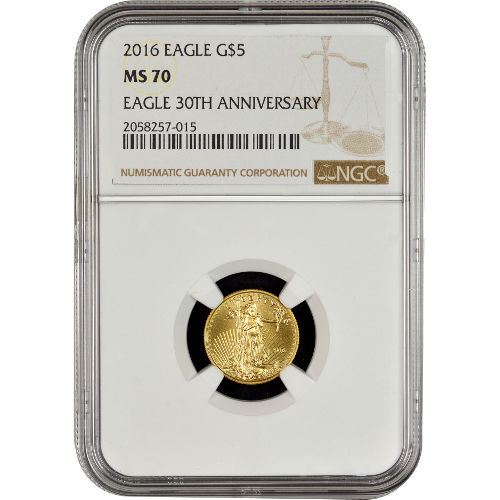 American Gold Eagle coins were first introduced in 1986 by the United States Mint, making 2016 the 30th anniversary celebration for the nations official bullion coin. Available today in bullion, proof, and burnished versions, the American Gold Eagle is part of the larger American Eagle program, which includes similar offerings in silver and a platinum version as well. Today, the 2016 1/10 oz American Gold Eagle coin is available from JM Bullion in perfect condition.

The United States Mint introduced the American Eagle program in 1986 with diverse offerings. The Silver Eagle was available in bullion and proof versions, with just a 1 oz weight offered. The American Gold Eagle, on the other hand, featured four weights in the bullion program and a 1 oz proof coin, that eventually expanded to include all three fractional-weight coins, as well.

Each of the 2016 1/10 oz American Gold Eagles listed here today is a perfect specimen according to the NGC. Coins with an MS70 grade have full, original luster and lack any detracting flaws.

On the obverse is the iconic image of Lady Liberty from the $20 Gold Double Eagle, which was minted from 1907 to 1933. President Theodore Roosevelt personally selected Augustus Saint-Gaudens to create the design, which helped reinvent American gold coin design.

The reverse features a design from modern artist Miley Busiek. Created in 1986 and used exclusively on the American Gold Eagle, Busieks depiction of a family of bald eagles includes a male eagle returning to the nest where a female closely guards a group of hatchlings.

All American Gold Eagle coins, bullion, proof, and burnished, are produced by the West Point Mint facility in the state of New York.

If you have any questions, please feel free to reach out to JM Bullion. Our associates are available at 800-276-6508, and online using our live chat and email features.