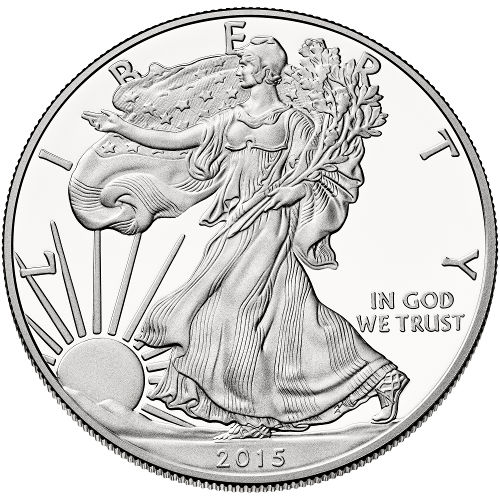 When the United States Mint introduced the American Silver Eagle in 1986, a design not seen by on American coinage in 39 years was chosen as a representative of America’s power, majesty, and grace.

Adolph A. Weinman had been commissioned in 1916 to help redesign the face of the nation’s half-dollar coin. His Walking Liberty depiction shows Liberty in full-length relief as she walks toward the setting sun, the American flag draped across her shoulders with oaken branches signifying the civil might of the US in her left arm.

John Mercanti, then-Chief Engraver of the United States Mint, created a modern depiction of the nation’s heraldic eagle, a symbol that appears on countless emblems for government agencies. Mercanti’s first year on the job as Chief Engraver was 1986, and he held the post until his retirement in 2010.

2015-W Proof American Silver Eagles are part of a record-breaking sales year for the United States Mint. After breaking records in five of the last seven years, the American Silver Eagle made it six in the last eight years by outselling 2014’s 44.7 million total with 47.3 million coins in 2015.

On the obverse of the coin is that beautiful image of Walking Liberty from Weinman. The reverse bears Mercanti’s heraldic eagle, along with the weight, purity, and metal content of the coin engraved along the bottom.

If you have any questions, JM Bullion encourages you to reach out to one of our associates. You can call us at 800-276-6508, chat with us live online, or send us an email.