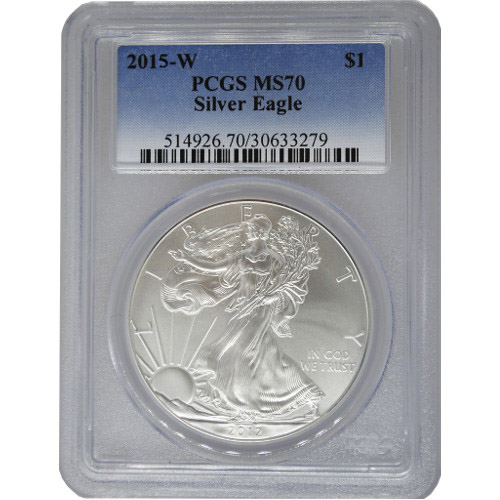 Like many collectible silver coins on the market today, the highest mintage figures for the Burnished American Silver Eagle coins came in the initial years of availability. Mintage jumped from 466,000 coins in 2006 when the burnished version debuted, to 621,000 coins for the 2007 release. However, after a drop in 2008, the coins were halted for 2009 and 2010 as the mint coped with intense demand for silver bullion.

The burnished version in the series is a special coin, with its own distinct visual beauty from the proof coins that gives the burnished option a special place in the collection of any numismatist that prefers to display or even showcase their specimens at coin shows.

On the obverse of the 2015-W 1 oz Burnished American Silver Eagle Coin you’ll find the image of Walking Liberty. Her figure walks toward the sun as it sets behind a mountain in the distance. The design is meant to reflect the nation’s drive toward a brighter future, with Liberty at the front of the pack leading the nation onward.

The reverse of the Burnished American Silver Eagle Coin includes the heraldic eagle of the United States. Refined for use on the Silver Eagle in 1986, it captures the bald eagle behind the nation’s heraldic shield. In its right talon is the olive branch of peace, while the left talon clutches onto the arrows of war.

All 2015-W 1 oz Burnished American Silver Eagle Coins here are available in Mint State 70 condition. The PCGS adjudges a coin as perfect, MS70, when it possesses full, original mint luster and lacks all possible detracting flaws on the surface areas. Perfect coins are hard to come by, and with just over 223,000 Burnished Silver Eagles struck in 2015, the perfect ones are few and far between!

We encourage all JM Bullion customers to contact us at 800-276-6508 with questions. You can also connect with us online using our live chat and email features.