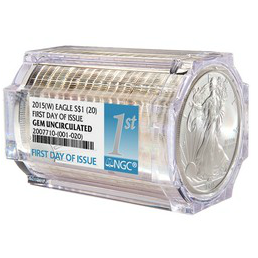 Please note – this product features the West Point label, but the coins themselves are BU items, and thus do not feature the W mint mark.

Bearing images that represent American freedom and power, the American Silver Eagle is the official silver bullion coin of the United States. First struck in 1986, these coins are among the most popular with numismatics today. Right now, you can purchase a special 2015 W American Silver Eagle roll of Gem Uncirculated coins from JM Bullion with a First Day of Issue designation from the Numismatic Guaranty Corporation.

The roll of 2015 American Silver Eagles available today includes 20 individual coins inside a sealed plastic tube. Each of the coins has been graded Gem Uncirculated by the NGC, indicating that the coins have only minor distracting marks or imperfections.

On the obverse side of the American Silver Eagle is the image of Walking Liberty. Designed by Adolph A. Weinman in 1916, the depiction shows Lady Liberty striding toward the setting sun with olive and oaken branches in her left hand. Engravings on this side include Liberty, In God We Trust, and 2015.

The reverse side bears John Mercantis heraldic eagle design. In it, an eagle is set behind the heraldic shield, with arrows in one talon and an olive branch in the other. There are 13 stars directly above its head, representing the original American Colonies.

American Silver Eagle coins are struck by the United States Mint each year at its facilities in San Francisco, Philadelphia, and West Point. If you have questions for JM Bullion associates about this American Silver Eagle roll, dont hesitate to contact us at 800-276-6508, or connect with us online using web chat and email.