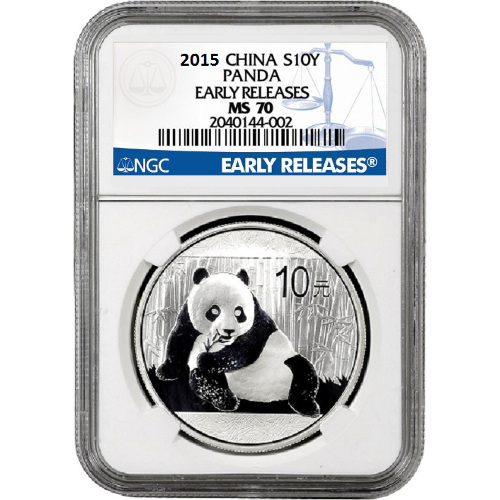 Each coin available today from JM Bullion is struck in .999 pure silver and has been given the highest grade possible by the Numismatic Guaranty Corporation, MS70. A Mint State 70 grade is reserved for coins which are considered perfectly struck. These Chinese Silver Panda coins are individually packaged with an NGC Blue Label as part of the Early Release series from the mint.

Chinese Silver Panda coins are not unique for their rotating imagery alone. The history of the coin itself is rare among sovereign silver coins. The program actually began with only proof coins in production. Original Chinese Silver Pandas were struck and released between 1983 and 1985 with limited mintages of just 10,000 annually. In 1986, the series was put on hiatus, with production resuming in 1987.

Chinese Silver Panda coins are struck for the Peoples Bank of China at several different mints throughout the country. The coins bear no mint marks, so its impossible to determine which facilities contribute to production.

If you have questions about the Chinese Silver Panda, we encourage you to contact a JM Bullion associate at 800-276-6508, or contact us online via web chat or email.