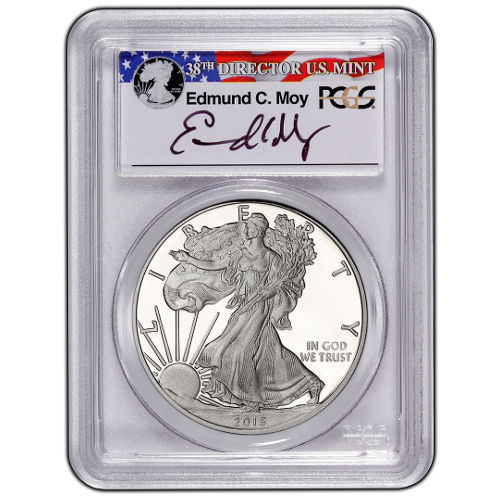 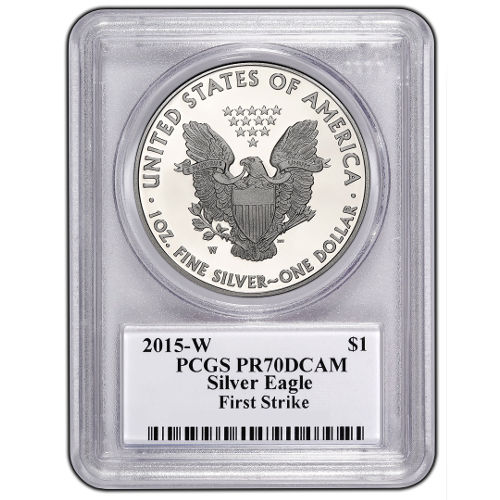 Numismatics generally prefer to purchase coins such as this 2015 American Silver Eagle proof because it comes from the First Strike series. The First Strike labels designate that the coins were received by PCGS within the first 30 days of the coins release. The dies used during striking are still pristine at this point, allowing grading services like the Professional Coin Grading Service to issue PR70 grades. A PR70 grade signifies a perfectly struck proof product.

Each of the 2015 American Silver Eagle coins available for sale in this First Strike set comes with an Ed Moy label inside its sealed packaging. Mr. Moy served as the 38th Director of the United States Mint, and the label bears his name and signature. The DCAM, or deep cameo, classification indicates a proof coin with a strong, frosted design set against a deeply mirrored, clear background field.

On the obverse side of the American Silver Eagle is Adolph A. Weinmans depiction of Walking Liberty. First used on the Walking Liberty Half Dollar from 1916 to 1947, Lady Liberty is featured walking toward the setting sun with the American flag draped around her shoulders. The reverse bears the image of the heraldic eagle designed in 1986 by US Mint chief engraver John Mercanti.

The United States Mint produces American Silver Eagle coins each year based upon demand for the product. In recent years, production levels have risen dramatically as numismatics clamor for the official silver bullion coin of the United States. The West Point, San Francisco, and Philadelphia Mints all participate in the production of American Silver Eagle coins.

If you have questions about these 2015 American Silver Eagles, please feel free to contact a JM Bullion associate at 800-276-6508. Our team members are also available online using our live web chat and email services.