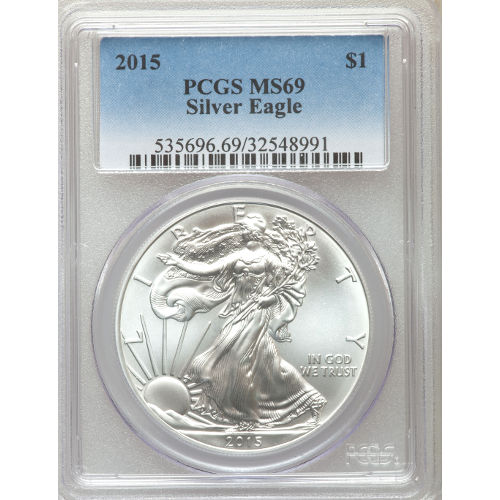 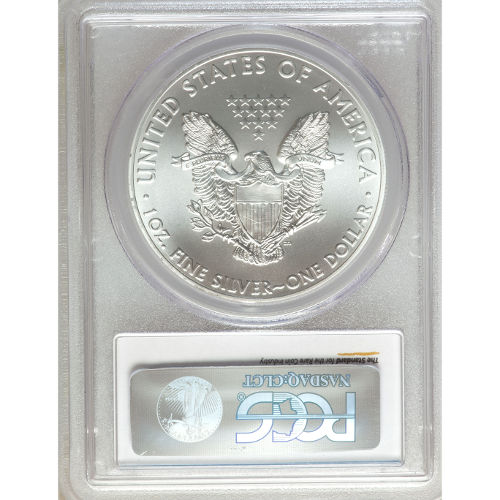 Fresh from the United States Mint, the 2015 American Silver Eagle marches forward into a 29th production year with demand higher than ever for this silver bullion coin. The official silver coin of the federal government, these coins are struck with .999 fine silver and carry a face value of $1, with its purity and value guaranteed by the United States government. Right now, you can purchase an all-new 2015 American Silver Eagle from JM Bullion with a Professional Coin Grading Service grade of MS69.

The PCGS does not hand out grades lightly. In order for these American Silver Eagles to receive a Mint State 69 grade, each one must display its full, original luster and a sharp, attractive strike for its mint and date. You will notice one or two minuscule contact marks on the coins, but there are no hairlines visible and the detractions are not visible without magnification.

American Silver Eagle coins were first introduced in 1986 after passage of the Liberty Coin Act. By law, all coins in the series must be struck using silver sourced from within the United States. The original supply of silver used in the program was provided by the Defense National Stockpile, though a 2002 extension from Congress allowed the Treasury Department to purchase additional silver stores, so long as all silver still came from within the US.

Adolph A. Weinmans depiction of Walking Liberty is featured on the obverse side of the coin. His image of Lady Liberty, draped in an American flag, was first used on the Walking Liberty Half Dollar between 1916 and 1947. On the reverse side is the heraldic eagle, as designed by John Mercanti of the US Mint.

The United States Mint produces bullion, proof, and uncirculated American Silver Eagles each year at its San Francisco, Philadelphia, and West Point Mint facilities. The bullion coins are the single most popular coins in the world today and are sure to sell out quickly.

If you have questions about these 2015 American Silver Eagle coins, please contact our associates. A JM Bullion team member can assist you on the phone at 800-276-6508, online through our live chat feature, and via email.