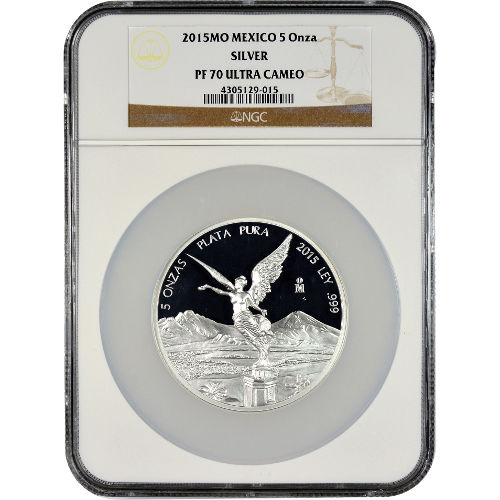 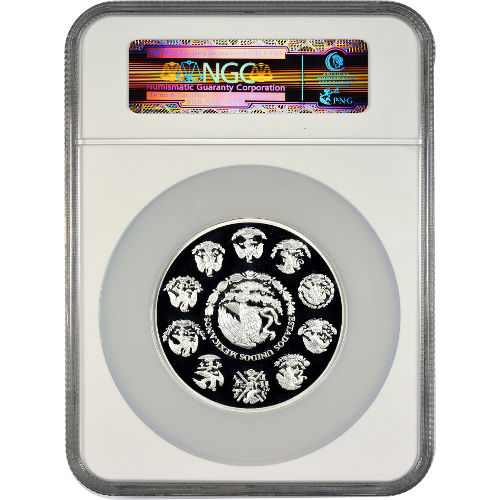 Mexican Silver Libertad coins are struck on an annual basis by the Mexican Mint, and there is a product from this lineup for every numismatists. The bullion coins are a favorite of investors, while the finish and design of the proof products make them a must-have coin for serious collectors. Today the 2015 5 oz Proof Mexican Silver Libertad Coin is available in perfect condition through JM Bullion.

The Mexican Silver Libertad debuted in 1982 as a bullion coin, with the proof series following in 1983. Both the silver and gold versions of the Libertad feature designs inspired by the gold Centenario coin released by the Mexican Mint in 1920.

Libertads originally used the same design of Winged Victory found on the Centenario, which depicted the Angel of Independence in a front-facing position. The modern twist on this design implemented in the 21st century features an exact likeness of the winged Victoria of Mexican Independence Victory Column from Mexico City, with viewers seeing her from the side.

Each 2015 5 oz Proof Mexican Silver Libertad in this product listing has a Proof 70 grade from the NGC. These perfect proofs have their full, original mint luster, and feature no detracting flaws of any kind.

On the obverse of the coin is the image of Winged Victory, complete with engravings of the weight, metal content, year of issue, and purity of the coin. The Mexican Mints OM mint mark is also featured on this side.

The reverse of all full-weight coins, including the 5 oz, in the Mexican Silver Libertad series bears the Mexican coat of arms used currently by the government in the center. Surrounding it are 10 historic versions of the seal used throughout the nations independent history.