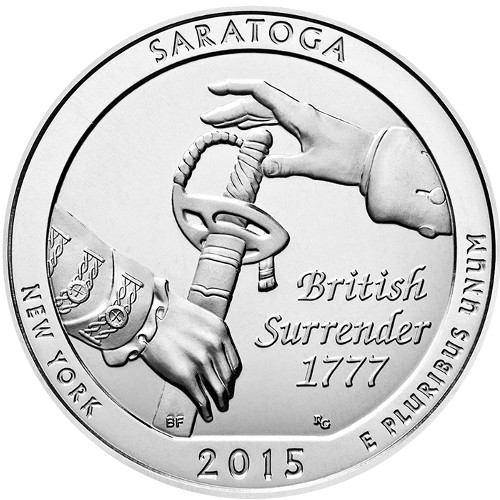 The Battle of Saratoga may have been the most important battle American forces have ever fought. It was in the tiny hamlet of Saratoga, New York, that Continental Army forces defeated, for the first time, the superior British Army. This historic event is remembered at Saratoga National Historical Park, and commemorated on the 2015 5 oz ATB Saratoga Silver Coin, available now from JM Bullion.

In the autumn of 1777, General John Burgoyne surrendered his sword and removed his army from the field of battle following defeat at the hands of the Continental Army under the guidance of General Horatio Gates. This moment was a turning point in the Revolutionary War, marking the first time an American army soundly defeated a British force, and paved the way for foreign recognition and aid for the United States.

America the Beautiful is a 56-coin series that honors and commemorates moments and places like this from across the country. The coin series launched in 2010, and features five new designs each year representing different jurisdictions from across America. In total, the program will run through 2021 and represent all 50 states, five territories, and one federal district of the United States.

The reverse side of each coin features the moment when General Burgoyne surrendered his sword to General Gates, with the additional engraving of “British Surrender 1777.” The standard engravings of the state, landmark, and “E Pluribus Unum” are also featured.

On the obverse, the nation’s first president is depicted in left-profile relief. President George Washington’s bust has been standard on American quarters since John Flanagan designed it in 1932 using a 1786 bust of the president by sculptor William Cousins as inspiration.

The United States Mint strikes all America the Beautiful coins at its Denver and Philadelphia Mint facilities. If you have questions about these coins, a JM Bullion associate will be happy to answer those inquiries. We’re available on the phone at 800-276-6508, online through our live chat, and via email. If you are interested in similar products, be sure to check out our collection of Canadian Silver Coins.

Dennis from WA - February 06, 2016
"I enjoy the America the Beautiful products. 5 ounce bullion that is more expensive that silver bars, but that offer the quality of US Mint collectibility. Only wish I had started buying these earlier in the program."

RICHARD from SC - December 17, 2015
"Mine arrived today and it was worth waiting for !. It's beautiful and brilliant. The details are perfect as you would expect from the US mint. As always, JMB delivered quick as it was available and it was in a perfect condition. VERY happy with all my JMB purchases and this was no different. JMB Is my silver dealer !"