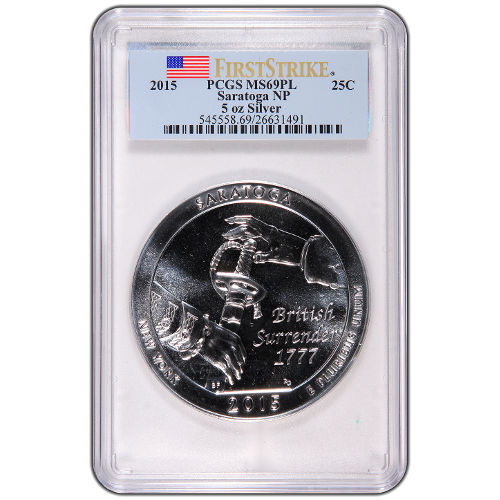 The America the Beautiful series of commemorative 5 oz quarters from the United States Mint has proven to be one of the mints most popular product lineups in recent memory. Launched in 2010 and inspired by the state quarters program, the ATB coins are a must-have each year. Right now, the 2015 5 oz ATB Saratoga Silver Coin is available in near-perfect condition from JM Bullion.

Each of the 2015 5 oz ATB Saratoga Silver Coins in this product listing earned a Mint State 69 grade from the PCGS. Considered near-perfect coins, each has its full, original mint luster and a maximum of two, minor detracting flaws on the surface.

The PL, or proof-like finish, of these coins identifies a bullion product with proof quality appearances. The surfaces, while not struck to these standards, have backgrounds similar to those often found on proof strikings. As First Strike coins, these products arrived at the PCGS or an approved depository within the first 30 days of the release date from the US Mint.

On the reverse of each ATB Saratoga Silver Coin is the image of the surrender ceremony following the Battle of Saratoga during the Revolutionary War. General John Burgoyne of Great Britain was dealt a decisive defeat, the first major American victory of the war, by General Horatio Gates of the Continental Army.

The obverse features another Revolutionary War hero, and the nations first president, George Washington. His image is in left-profile relief and is similar to that featured on the standard quarter in circulation in the United States.

America the Beautiful is a 56-coin series from the United States Mint that was released in 2010. The program follows a five-coin annual release schedule that honors parks, forests, and historic monuments from each of the 50 states and five overseas territories.