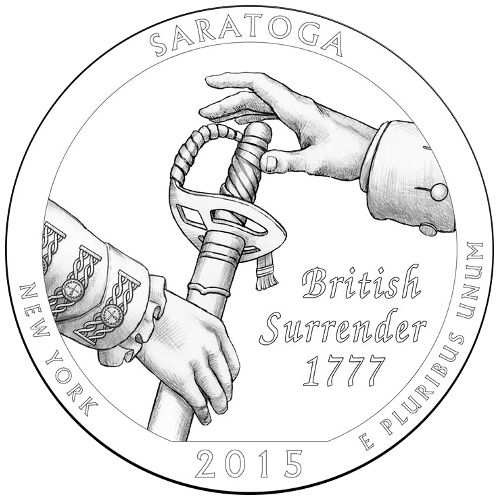 America the Beautiful celebrates the conclusion of its sixth production year with the release of a coin that honors the nations first major military victory. The Battle of Saratoga was a critical turning point during the Revolutionary War, and Saratoga National Historical Park preserves the battlefield where America flexed its muscle for the first time. The 2015 5 oz ATB Saratoga Silver Coin is now available in a Monster Box from JM Bullion.

With defeat of the British Army on the fields of Saratoga County, New York, General Horatio Gates and the Continental Army scored the first massive victory over the British of the Revolutionary War. In defeating the British at Saratoga, the Americans garnered international recognition for the cause of independence from France, and picked up a critical ally in the process.

The America the Beautiful coin series followed up on the success of the state quarters program from the US Mint. While the latter was a circulation quarter program, America the Beautiful is a 56-coin program that features 5 oz silver coins honoring the nations parks, forests, and historic landmarks.

On the reverse side of each coin is the image of General Burgoyne as he hands his sword over to General Gates, a gesture which is symbolic of surrender. While most ATB coins only have engravings of the state, landmark, and E Pluribus Unum, this coin has the additional engraving of British Surrender 1777.

The obverse bears the standard image of President George Washington. His left-profile portrait has featured on the American quarter since 1932 when John Flanagan refined the image for use on the coins.

All America the Beautiful quarters are produced at the United States Mints Denver and Philadelphia facilities. For those with questions about these America the Beautiful coins in a 100-coin Monster Box, please reach out to a JM Bullion associate at 800-276-6508. You can also connect with us online through our live web chat and email services. If you are interested in similar products, please check out our full selection of America the Beautiful Coins.