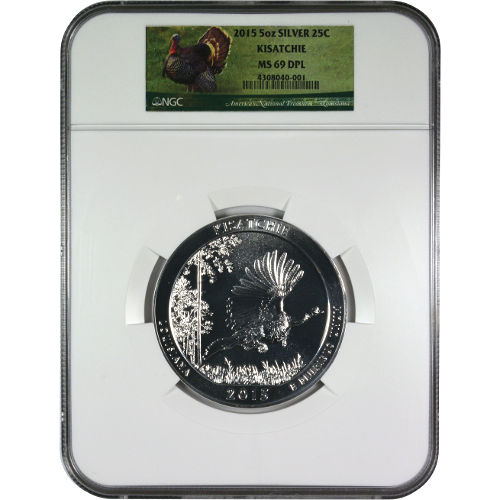 The US state of Louisiana is one of the most unique in the country. Once the seat of French power in North America, the state is a combination of cultures and beliefs unlike those in any other state, with many people living in the state still fluently speaking French in the home. Today, the 2015 5 oz ATB Kisatchie Silver Coin is available online courtesy of JM Bullion in near-perfect condition.

When the average American thinks of the state of Louisiana, the city of New Orleans and the Mardi Gras celebration come to mind for most. The state is home to some of the most diverse environmental locales in the United States of America, including Kisatchie National Forest in the northern reaches of the state.

Each of the 2015 5 oz ATB Kisatchie Silver Coins in this product listing are in Mint State 69 grade according to the NGC. Coins with this certification level exhibit full, original luster from the mint and a maximum of two minor detracting flaws.

The DPL designation refers to the coins visual appearance. Although this is a bullion coin, youll notice deeply-mirrored appearance on the background field and matte, frosted visuals on the design set.

On the reverse side of these America the Beautiful coins youll find the image of local water fowl resting and feeding in the bayous of Kisatchie National Forest. The state of issue, national forest, and year of issue are all engraved on this face.

The obverse includes the left-profile portrait of President George Washington. Americas first democratically elected leader has appeared on the obverse of American circulation quarters since 1932.

Please direct your questions to a JM Bullion associate at 800-276-6508, or connect with us online using our live web chat and email features. If you are interested in similar products, check out our selection of Certified America the Beautiful Coins.