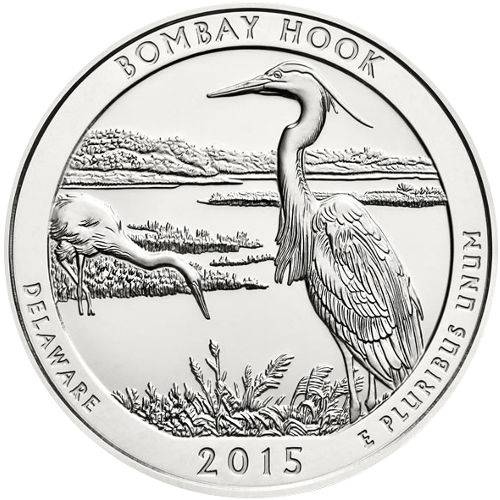 The United States Mint’s America the Beautiful coin series continues in 2015 with the release of the fourth coin in the production year, and 29th overall coin struck in the series. Representing the state of Delaware in the ATB series is the Bombay Hook National Wildlife Refuge, which was founded as a national protected area in 1937. The 2015 5 oz ATB Bombay Hook Silver Coin is now available from JM Bullion.

Located along the coast of Delaware, the Bombay Hook National Wildlife Refuge covers 15,978 acres of land in Kent County. The refuge was established as a breeding ground for migratory and wintering waterfowl that use the Atlantic Flyway to migrate along the eastern seaboard. The refuge was founded on March 16, 1937 and is managed by the US Fish and Wildlife Service.

America the Beautiful is a 56-coin series that honors national parks, national forests, and historic landmarks from across the country. Unveiled for the first time in 2010, the ATB Silver Coins feature five new designs each year and production is scheduled to extend through 2021. The series represents all 50 US states, the five overseas territories, and the District of Columbia.

On the reverse side of the coin you’ll find the image of a great blue heron standing amongst the reeds of the marshland in the foreground, while a great egret dips its bill in the water in the background.

The obverse side of the coin bears the refined version of John Flanagan’s left-profile bust of President George Washington. Featured on all circulation American quarters, the image is based upon a 1786 sculpture of President Washington by William Cousins.

The United States Mint has increased production of America the Beautiful coins significantly in recent years. Mintage for these coins is expected to match that of other ATB coins.

If you have questions for a JM Bullion associate, feel free to call us at 800-276-6508. You can also connect with us online through our live chat and email services.