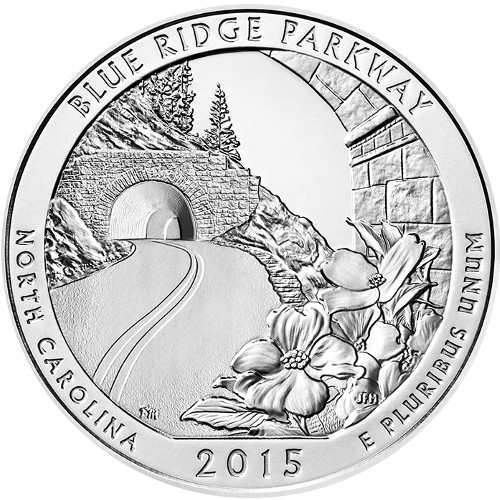 The America the Beautiful coins series unveiled a brand-new set of designs for the 2015 production series, and North Carolina is represented by the Blue Ridge Parkway. Unlike many of the other coins in the series, the North Carolina coin honors both a National Parkway and All-American road. The 2015 5 oz ATB Blue Ridge Parkway Silver coin is now available through JM Bullion.

The Blue Ridge Parkway connects 29 counties in Virginia and North Carolina via a highway that cuts through the Blue Ridge Mountains. The project was part of President Franklin D. Roosevelts public works projects during the Great Depression. The scenic highway covers 469 miles and, though not a National Park, it is administered by the National Park Service.

America the Beautiful is a 56-coin series that honors the memorials, parks, forests, and important places of the nation. Each year the US Mint releases five new coins representing different states. When the coin program concludes in 2021, there will be a coin representing each of the 50 states, five territories, and the District of Columbia.

On the reverse side of the coins is the image of the scenic byway as it cuts through the Blue Ridge Mountains, with the roadway opening up momentarily as it transitions from one mountain tunnel to another.

The obverse side of each coin bears the standard imagery found on American quarters. President George Washingtons left-profile bust, designed in 1932 by John Flanagan, is featured in the center. These Blue Ridge Parkway coins are third released in the 2015 production year.

The United States Mint produces all America the Beautiful coins at its Denver, San Francisco, and Philadelphia Mint locations. A special coining press was installed in Philadelphia in 2009 to produce proof coins, although that facility also produces bullion coins.

If you have any questions for a JM Bullion associate, we encourage you to call us at 800-276-6508. You can also connect with us online through our live chat and email services. If you are interested in similar products, please visit our Silver Coins page.

Ron from NY - July 06, 2015
"I bought this pre-sale to take advantage of the lower over spot price. It arrived today. I am not disappointed. Is it a gradable coin? No. Is it a nice bullion version? Yes. JM even tells you that blemishes and abrasions are normal. Aside from a scratch in Washington's neck, its a nice coin. If you want close to perfect, your going to have to plunk down an extra 50 bucks to the US Mint. Yes, I continue to utilize JM as my #1 place to purchase PM's."

Dave from MD - July 05, 2015
"This was my first ATB coin purchase, got this one because I'm near the Blue Ridge Mountains.. In person this coin if gorgeous, much larger than I thought it would be and stunning design."