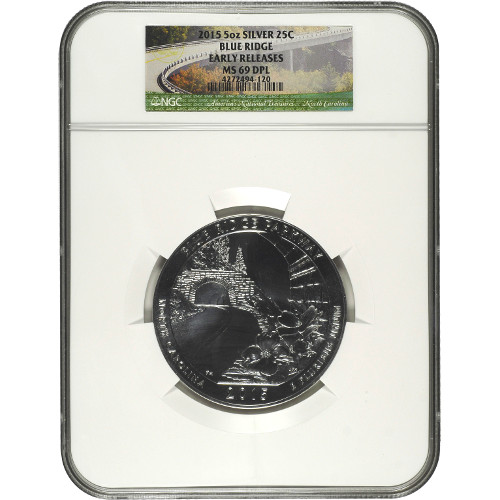 America the Beautiful is a 56-coin series that celebrates the national parks, forests, and historic landmarks of the United States. The Blued Ridge Parkway began during the administration of President Franklin D. Roosevelt as part of his many public works efforts during the Great Depression.

Each 2015 5 oz ATB Blue Ridge Park Silver Coin in this product listing was graded MS69 by the NGC. Coins in this condition feature their full, original luster, and as many as two minor detracting flaws. By NGC guidelines, these flaws must not be visible in the coins primary focal areas to be considered near-perfect.

Additionally, this coin is part of the Early Release Series from the United States Mint. Sealed and shipped in US Mint boxes to the NGC, these coins were received by the NGS within the first 30 days of the coin’s release. Each coin has a deeply-mirrored, proof-like finish, indicating visual brilliance on a bullion coin.

On the reverse side of the coin is the image of the rolling hills of the Blue Ridge Mountains, with the roadway opening up from one mountain tunnel. A second tunnel is visible as the road winds along the mountains. The obverse bears the standard image of President George Washington. His left-profile portrait has featured on American quarters since 1932.

If you have any questions about these near-perfect coins, dont hesitate to reach out to a JM Bullion associate. Were available on the phone at 800-276-6508, online through our live web chat, and via email. If you are interested in similar products, be sure to check out our Silver Coins selection.