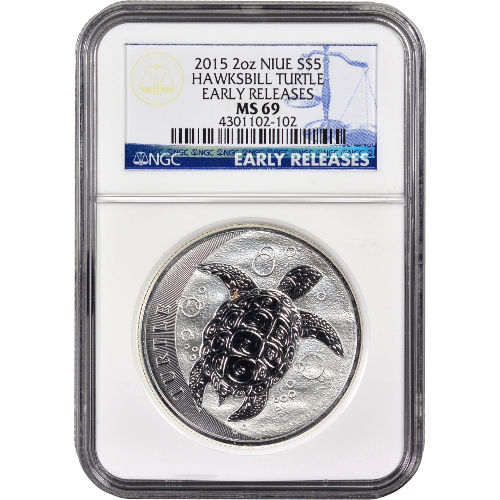 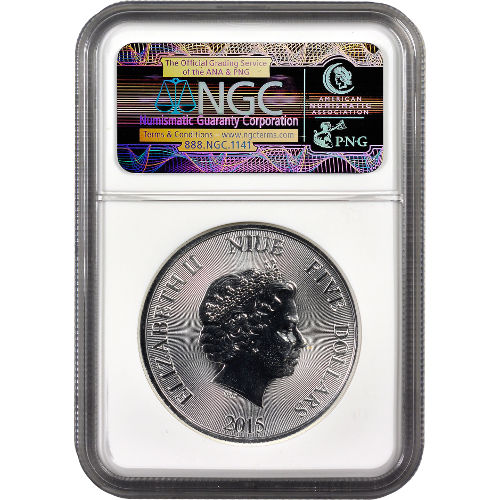 One of the up-and-coming bullion products in the world today is the Niue Hawksbill coin from the New Zealand Mint. First introduced just six years ago, this coin program has led an interesting life to date, and is already among the top coins in terms of demand and popularity. Right now, you can purchase a 2015 2 oz New Zealand Silver $5 Niue Hawksbill coin in near-perfect condition from JM Bullion.

Hawksbill Turtle coins are issued annually now for the island of Niue, which holds status as self-governing state in free association with the country of New Zealand. Originally introduced in 2010, the Hawksbill Turtle coin was first known as the Fiji Taku. The coins were issued for Fiji from 2010 to 2013.

Each 2015 New Zealand Silver Niue Hawksbill available in this JM Bullion product listing is in near-perfect MS69 condition. The NGC defines coins of this type as having full mint luster, but also a maximum of two minor detracting flaws. As Early Release coins, these products were packaged and shipped to the NGC or an approved depository within the first 30 days of the date of issue.

The reverse face of the coin features the hawksbill turtle as it swims through the waters of the Pacific Ocean. A native species of tropical climates in the Atlantic, Pacific, and Indian Oceans, the hawksbill makes an annual trek from the shores of Fiji to the shallow waters off New Zealands north coast.

On the obverse youll find the image of Queen Elizabeth II, captured in right-profile relief by Ian Rank-Broadley. Along with Her Majestys image youll find engravings of her name, the nation of issue, and the face value of the coin.

If you have any questions, please dont hesitate to ask. You can reach a JM Bullion associate on the phone at 800-276-6508, online using our live chat service, or via email.