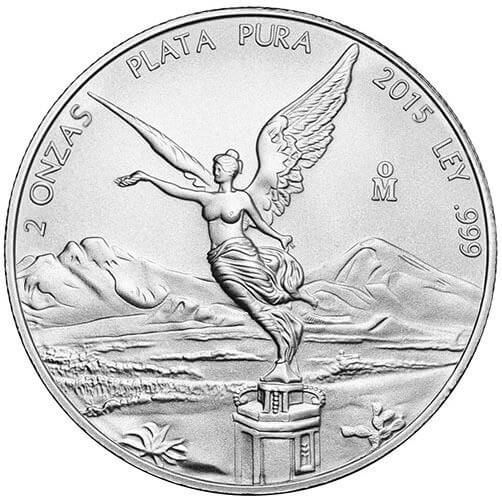 The official Banco de Mexico packaging guidelines for this product are“Bags with 300coins (15 Rolls of 20 coins)”. Orders of 20 coins will ship in a mint sealed roll.

The Mexican Silver Libertad may have been introduced in 1982, but it bears images of historical significance in Mexican society that originated on the Centenario gold coin program in 1920. In celebration of the centennial of its War of Independence with Spain, the Mexican Mint struck a gold coin with images of the Angel of Independence and the national coat of arms. Each year the Mexican Mint strikes the Libertad coin series in 5 oz, 2 oz, 1 oz, oz, oz, 1/10 oz, and 1/20 oz weights.

Today, those images live on through inclusion on the obverse and reverse sides of Mexican Silver Libertad. The obverse bears the image of a winged Angel of Independence, the symbol of Mexicos long struggle to gain freedom from Spanish oppression. Behind the angel is the image of the Mexican volcanoes of Popocatepetl and Iztaccihuatl. Engravings include the weight, purity, and metal content of the coin, each of which is inscribed in Spanish.

On the reverse side is the Mexican coat of arms in the center of the coin. It is immediately surrounded by engravings including a wreath and the phrase Estados Unidos Mexicanos. The outer rim of the reverse face includes various depictions of the coat of arms used through Mexicos history.

The Mexican Mint, or La Casa de Moneda de Mexico, is the official mint of Mexico. Established by Spanish conquistadors in 1535, it is the oldest facility still operating today in the Americas.

If you have questions about the 2015 Mexican Silver Libertad coin, we encourage you to reach out to a JM Bullion associate. Our team members are available on the phone at 800-276-6508, through our websites live chat service, and via email.

Daniel W from FL - October 26, 2015
"I just got this coin today and it might be my favorite in my silver collection."

Andrew from OH - August 13, 2015
"A really beautiful coin! No contact marks. Received in almost perfect condition, however it was just about busting out of the flip. This will probably not be the last one that I order. Thanks, JMB!"

Ray from MO - May 30, 2015
"This 2oz. Libertad has to be one of the most beautiful coins sold ! I would buy stacks & stacks of these if I could. Excellent Product JMB"