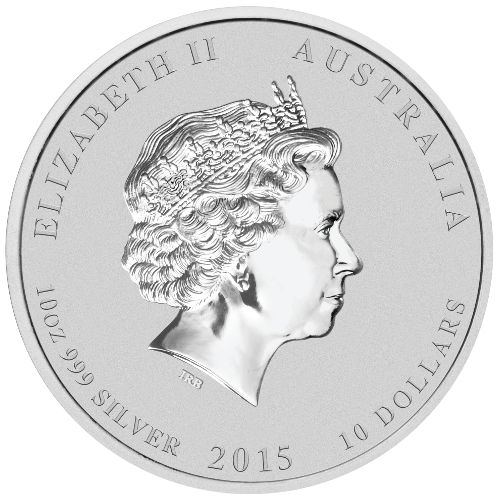 The Perth Mint of Australia has unveiled its new coin series for the 2015 lunar year. After garnering rave reviews for its 2014 Lunar Year of the Horse Silver coins, the mint has revealed the brand new 2015 year of the goat coin series. The 2015 10 oz Australian Silver Goat coins will share some design features with the 2014 coins, but will have an all new design on the obverse side of the coin. All of the 2015 10 oz Australian Silver Goat coins will have a true weight of 10 troy oz, and will be minted with .999 pure silver. The last time a goat appeared on commemorative coins from the Perth Mint was over a decade ago when it released the 2003 Silver Goat coin.

The 2015 10 oz Australian Silver Goat follows some of the design elements of the 2014 horse coins, but diverges to display unique images for the Lunar Year of the Goat. The image includes three goats with long hair grazing in a pasture. The border of the coin is surrounded by leaves and tree branches along the left, with patches of long grass noticeable in the background. Two of the goats have their heads aloft, looking about alertly, as a third goat has its head down grazing in the meadow.

The obverse side of the coin will feature the aforementioned Lunar Year of the Goat design. Set within the image is the Chinese symbol for the goat, with the phrase Year of the Goat emblazoned along the bottom.

The Perth Mint of Australia was established as part of Britains Royal Mint system in 1899. The mint was initially opened to refine the gold coming from the nations gold rush, minting gold sovereigns and other coinage for the British Empire. Although the Perth Mint was the last of the three Australian mints to open, it is the only one that remains in operation today following the closure of the Sydney Mint and Melbourne Mint.

Phillip from TX - July 16, 2015
"My first Lunar Series coin but certainly won't be my last. Love the detail. Thank you JM Bullion!"

Ramesh from CA - July 09, 2015
"Got one of this for my silver collection and it is a nice looking coin. I like the finish on the 2015 Kookabura is much better. JM Bullion rocks!!!"

Eric from MO - April 21, 2015
"Got my first lunar series coin, and it is very impressive. I am just starting to move away from generic 10oz bars to 10oz coins. JM Bullion prices are just so good that I figure it's worth the extra few dollars to have something that is beautiful on top of being 10oz of silver. I can't say enough good things about this company. If you are looking for an online bullion dealer, I would definitely recommend JM Bullion."