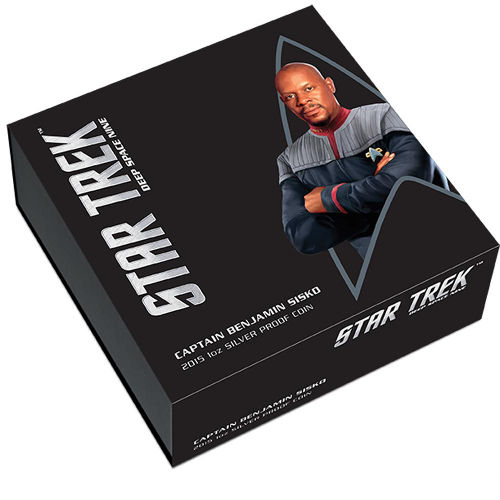 The Perth Mint continues its popular Star Trek coin series with the release of the third set in the installment. Australias historic mint is producing a series of coins in honor of Gene Roddenberrys Star Trek universe, with the coins released in order of appearance on television and in popular culture. Right now, the 2015 1 oz Star Trek Captain Sisko Proof Silver Coin is available from JM Bullion.

Gene Roddenberrys Star Trek concept landed on American television sets in the 1960s with Star Trek: The Original Series, and was followed by the spin-offs of The Next Generation (1987-1994) and Deep Space Nine (1993-1999). The Perth Mint is honoring each of these TV series with proof coins.

The Deep Space Nine coin set follows the motif of the previous two released in the series, commemorating the brave captain depicted in the show, as well as the vessel in which he was hurtling through space. The first coin in the Deep Space Nine series features actor Avery Brooks as Captain Benjamin Sisko.

On the reverse side of this coin is the image of Avery Brooks as Captain Sisko. In the background, a Star Trek motif is visible, with Captain Brooks featured in full color as a contrast against the silver background. The coins weight and purity are engraved on this side, as well as the P mint mark of the Perth Mint.

The obverse side features the standard right-profile portrait of Queen Elizabeth II. Her likeness is encircled by the engraving of her name above, and the phrase 1 Dollar Tuvalu 2015 below. Jennifer McKenna, a Perth Mint engraver, designed the reverse Star Trek-themed image, while Queen Elizabeth IIs likeness is the same created by Ian Rank-Broadley.

The Perth Mint is Australias oldest operating facility, and has grown in stature to become one of the most respected facilities in the world. Today, it is a state-owned entity of Western Australia and is not affiliated with the nations federal government.

If you have questions, dont hesitate to reach out to a JM Bullion associate at 800-276-6508. You can also reach us online via our live chat and email services. If you are interested in similar products, be sure to check out our full selection of Australian Silver Coins.