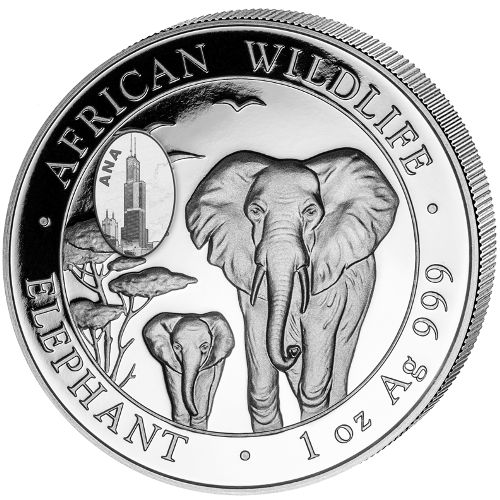 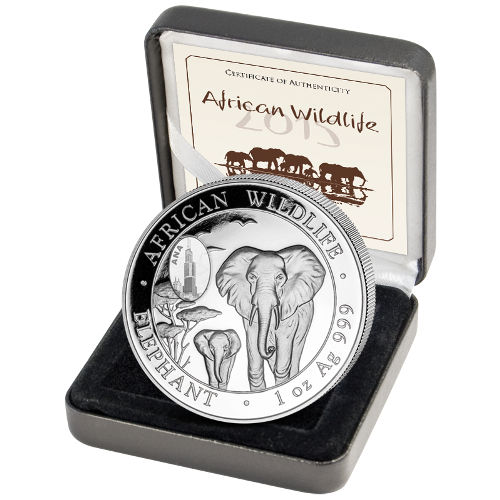 The most popular coin in the African Wildlife Series has been the Somalia Elephant coin from Germanys Bavarian State Mint. The series of coins calls attention to the flora and fauna of Africa, and this specific coin honors the threatened status of the African Elephant. In this product listing, a special 2015 1 oz Somalia Silver Elephant Coin is available from JM Bullion with an ANA Chicago Privy mark.

The African Elephant first appeared on a Somalia coin issued by the Bavarian Mint in 1999, but made its debut as part of the African Wildlife Series in 2004. Every year the Mint produces the Somalia Elephant coin with a brand-new design, adding to the interest among collectors looking for unique designs on an annual basis.

The 2015 Worlds Fair of Money is sponsored by the American Numismatic Association. Held in Chicago, IL, each of these coins displayed at the event come with a special ANA Chicago Privy on the obverse face. The privy features the iconic Willis Tower in downtown Chicago in an oval on the left side of the obverse side, along with the engraving ANA.

On the obverse, the 2015 design of the elephant features an adult female guiding her young cow across the open savanna. Engravings around the design set include African Wildlife, Elephant, and the coins weight, metal content (Ag), and purity.

If you have any questions, please dont hesitate to contact a JM Bullion associate. Were available on the phone at 800-276-6508, online via live web chat, and through email. If you are interested in similar products, be sure to check out our full selection of Somalia Silver Coins.