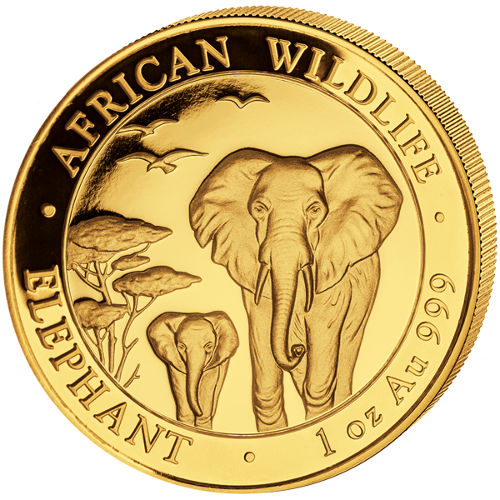 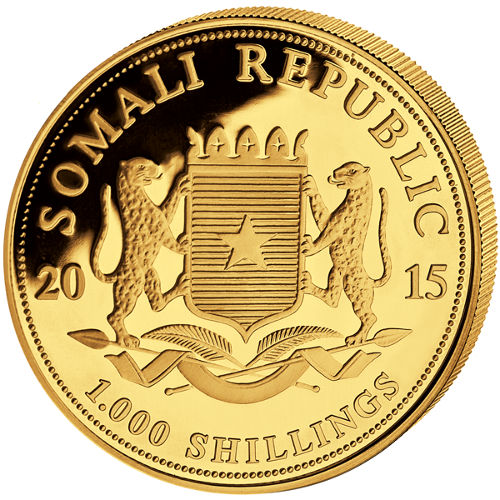 When most people think of the African continent, images of some of the worlds most majestic creatures are conjured up. Thoughts of wildlife safaris, mingling with lions, gazelles, and enormous African elephants come to the minds of many individuals when thinking of Africa. The Bavarian Central Mint pays homage to the worlds largest land mammal on the 2015 1 oz Somalia Gold Elephant coin. Featuring .999 pure gold, this coin is a great investment option for collectors around the world.

The 2015 1 oz Somalia Gold Elephant has just completed its initial minting and is ready for shipment today. The coin is issued by Somalia, produced in Germany, and is the latest coin in a series of bullion products that showcase wildlife in Africa. The first coins were released in 2004. The Somalia Elephants featured on the coin are indicative of the majestic, yet endangered, beasts that roam the open landscape of Africa.

The reverse side of the coin bears the aforementioned image of the Somalia Elephants. Engraved above their heads is the phrase African Wildlife, while Elephant and the weight, purity, and metal are engraved below the image. On the obverse side, the heraldic symbol of the Somalia Republic is featured. In the image, two wild cats grasp a shield with a single star in the center. The cats rest on two crossing arrows with olive branches. Somali Republic is engraved above the image, while the face value is engraved below and the year of minting engraved on either side of the image.

As always, all orders placed with JM Bullion will be shipped, quickly, discreetly and completely free of charge. All shipments include insurance and full tracking as well at no additional cost. If any questions should arise regarding our 2015 1 oz Somalia Gold Elephant Coins please give us a call at 800-276-6508. Our representatives are also available via the live chat feature or by email.

Daniel from PA - July 11, 2015
"This coin is a piece of art. I purchased some tubes of the silver elephants and couldn't resist the gold version. Awesome coin. Once again, amazing service from JM. I'm getting tiered of checking out other sites (just to make sure I'm getting the best prices) and finding much less selection and much higher prices at every on-line seller of precious metals. JM comes out on top every time."