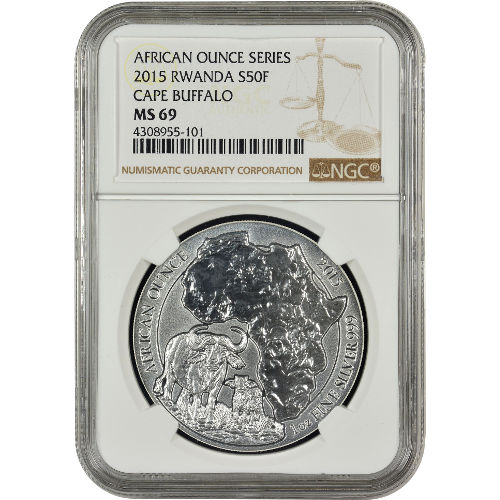 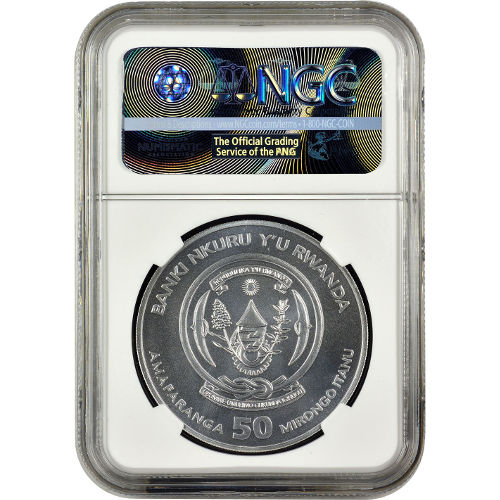 The Rwandan Wildlife Series is one of the often overlooked coin series available today. While coins from the African continent are increasing in number, the Somalian Elephant Silver coin often dominates the headlines. Rwandan Wildlife coins feature a new animal species each year and were introduced in 2008. Today, the 2015 1 oz Rwandan African Buffalo Silver Coin is available in near-perfect condition from JM Bullion.

The series launched in 2008 with the gorilla design. All coins in the series have a common obverse background that features a rugged outline of the African continent, and includes the specific species highlighted in the lower-left field of the obverse design.

Each 2015 Rwandan African Buffalo coin in this product listing is considered a near-perfect coin according to the NGC. Coins in this condition have their full, original mint luster, but also feature a maximum of two minor detracting flaws on the surface.

The obverse face of the coin features the common design element of the African continent, as well as the image of an adult Cape Buffalo and its calf standing amidst the savanna. Engravings include “African Ounce,” “2015,” and “1 oz. Fine Silver 999.”

On the reverse is the official crest for the nation of Rwanda, as well as numerous engravings identifying the Central Bank of Rwanda as issuer. All engravings are in a local Rwandan tribal dialect.

The government approached the BH Mayer Mint of Germany to produce these coins as an annual-release product. Mayer Mint, as it is better known, has been a family run enterprise since it was founded in 1871.

Please direct your questions to a JM Bullion associate at 800-276-6508, connect with us online using our live chat, or email us.