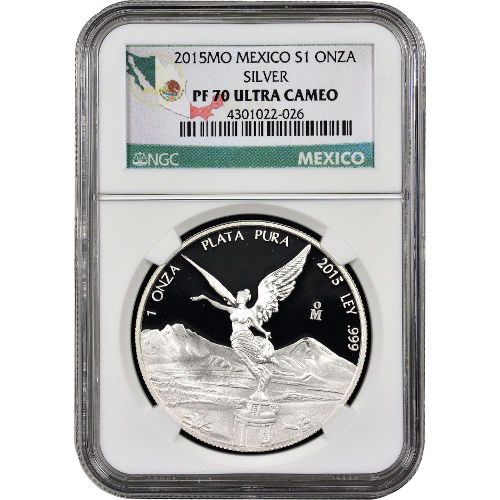 The official silver bullion product of Mexico is the Silver Libertad coin, and it is produced every year in both bullion, proof, and proof-like versions. Introduced for the first time in 1982, the design of these coins as remained consistent over time, with just one update to the imagery in 2000. Right now, JM Bullion offers the 2015 1 oz Proof Mexican Silver Libertad Coin in perfect proof condition.

Mexican Silver Libertad coins are one of a number of increasingly popular coins available from sovereign mints around the globe. Unlike other programs that strike millions of coins, the Mexican Mint maintains the popularity of and demand for Libertads through limited production.

Each 2015 1 oz Proof Mexican Silver Libertad available to you today is in perfect Proof 70 condition according to the NGC. This indicates a coin that has its full, original mint luster, and no detracting flaws of any kind.

On the obverse face of all Mexican Silver Libertad coins is the image of Winged Victory. A symbol of the Mexican resistance during the nations War of Independence, a statue of her likeness stands in the center of Mexico City today. The reverse bears the modern coat of arms for the nation, along with 10 historical versions of the symbol.

The Mexican Mint is the oldest operating facility in the Western Hemisphere, having been founded in 1535 by Spanish conquistadors looking to exploit the regions vast wealth and export it back to Europe.

Please direct your questions to a JM Bullion associate at 800-276-6508, online using our live chat, or via email.