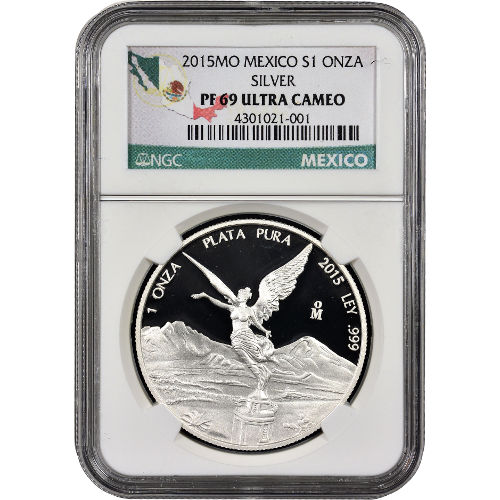 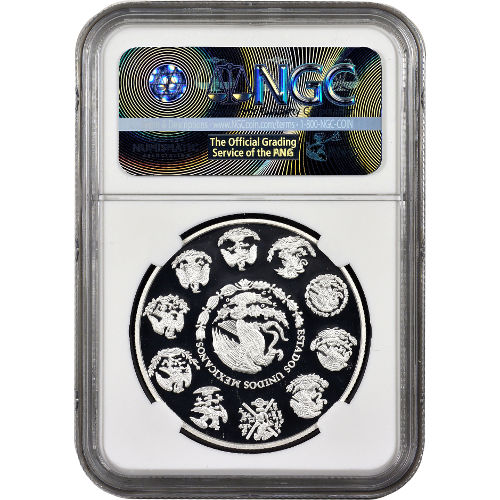 Mexican Silver Libertad coins are the official silver bullion products of the nation of Mexico. Based upon the historic Centenario gold coin, these products were first introduced in silver in 1982. Today, it is one of a growing number of popular bullion programs, and the 2015 1 oz Proof Mexican Silver Libertad coin is currently available in near-perfect proof condition from JM Bullion.

Mexican Libertad coins were introduced in the early 1980s by the Mexican Mint as it looked to offer an official bullion coin. The coins are struck on an annual basis in both silver and gold, with the silver program offering the most consistency in striking and variety.

The Proof Mexican Silver Libertad was offered originally in 1983 with just a 1 oz weight. After a two-year hiatus, regular production of 1 oz coins restarted in 1986. The proof version expanded in 1992 to include four fractional-weight coins, and again in 1996 to include a 2 oz and 5 oz variety.

Each 2015 1 oz Proof Mexican Silver Libertad in this listing has a PF69 grade from the NGC. Coins in this condition have their full, original mint luster, with a maximum of two minor detracting flaws. The ultra-cameo designation is for coins with a proof finish that includes a strong, frosted finish to the design set and a deeply-mirrored, clear background field.

On the obverse of each coin youll find the image of Winged Victory. The official symbol of Mexicos War of Independence, its likeness is also found in the center of Mexico City on the Victoria of Mexican Independence Victory Column. The reverse bears the Mexican coat of arms, along with 10 historic versions of the official emblem of the nation.

The Mexican Mint was originally founded by Spanish conquistadors in 1535, making it the oldest operating facility in the Western Hemisphere. Today, the mint is controlled by the federal government in Mexico and overseen by the Banco de Mexico, the nations central bank.

If you have questions, please reach out to JM Bullion at 800-276-6508. You can also connect with us online using our live chat and email features.