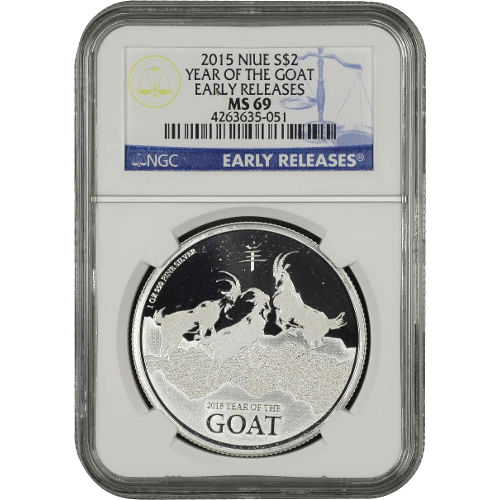 Lunar Series coins were made popular by the Perth Mint with its original Lunar Series I coins, first launched in 1996. Now, mints around the globe offer Lunar Series coins, including the New Zealand Mint. In this product listing today, you have the opportunity to purchase a 2015 1 oz New Zealand Goat Silver coin from JM Bullion.

Lunar Series coins are characterized by brand new designs each year. All coins from these series celebrate the animals of the Chinese Lunar Calendar, also known as the Zodiac. In Chinese culture, this come about when the Jade Emperor called a meeting of the animals of the world. Each coin in this listing is available in near-perfect condition, with its full, original luster and no more than two minor detracting flaws. The Early Release label designates that the coins were received by NGC within the first 30 days of the coins release

On the reverse side of the coin is an image entitled The Lucky Three. In the depiction, three goats can be seen atop a craggy environment. Above the image is the Chinese symbol for goat, with 2015 Year of the Goat engraved below. The coins weight, purity, and metal content are included on this side.

The obverse side bears Ian Rank-Broadleys right-profile portrait of Queen Elizabeth II. A standard image on coins struck in the South Pacific, the Queens effigy is included along with the engravings Elizabeth II, Niue, Two Dollars, and the year of minting.

The New Zealand Mint is a privately owned mint in Auckland that produces numerous coins, both circulation and commemorative, for smaller nations throughout the South Pacific. These coins are considered legal tender in Niue.

If you have any questions about these product, a JM Bullion associate will be happy to answer those inquiries. You can call us at 800-276-6508, chat with us online, or send us an email. If you are interested in similar products, be sure to check out our full selection of New Zealand Silver Coins.