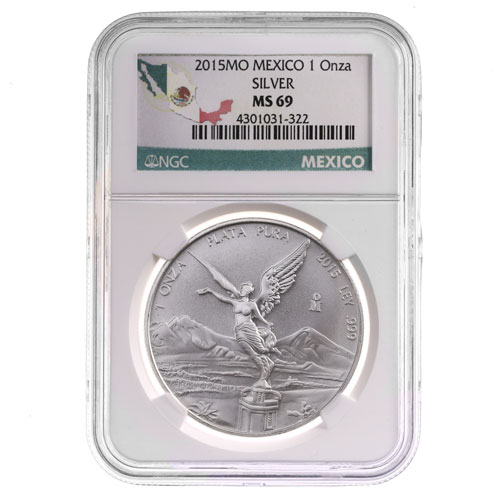 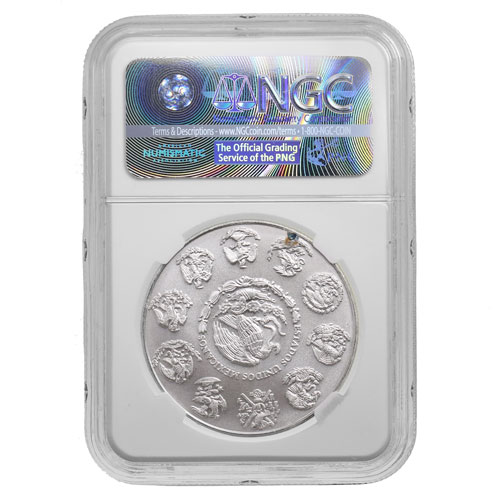 Mexicos long war for independence from Spain was launched in 1820. One hundred years later as the nation celebrated the centennial of the wars start, the Mexican Mint released a coin known as the gold Centenario. The coin featured iconic Mexican symbols born of the conflict, and was released annually through 1949.

All 2015 1 oz Mexican Silver Libertad coins available here today are in near-perfect condition according to the NGC. Coins with an MS69 grade have their full, original mint luster, but also have a maximum of two minor detracting flaws.

On the obverse is the image of the Angel of Independence, as featured on the victory column in the center of Mexico City. The iconic image of Winged Victory was created during the war for independence, and erected in Mexico City in 1920.

The reverse features the Mexican coat of arms in several different versions. In the center of the design is the modern depiction of the seal, while 10 historic versions encircle it around the outer rim of the coin.

The Mexican Mint is the Western Hemispheres oldest operating facility. Founded in 1535 by Spanish conquistadors, today it is property of the Mexican government and its operations are overseen by Banco de Mexico.

Please direct any questions you have about this product to a JM Bullion associate at 800-276-6508. We are also conveniently located online via live chat and email features.