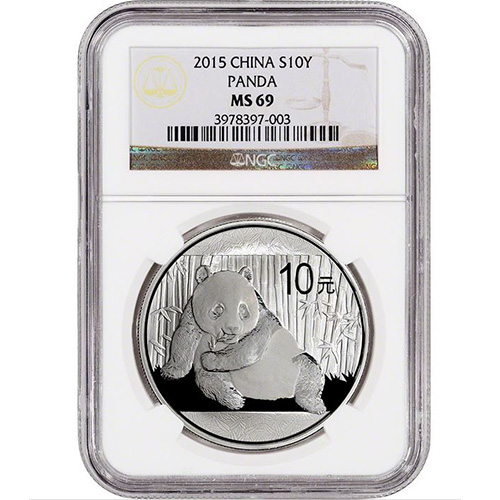 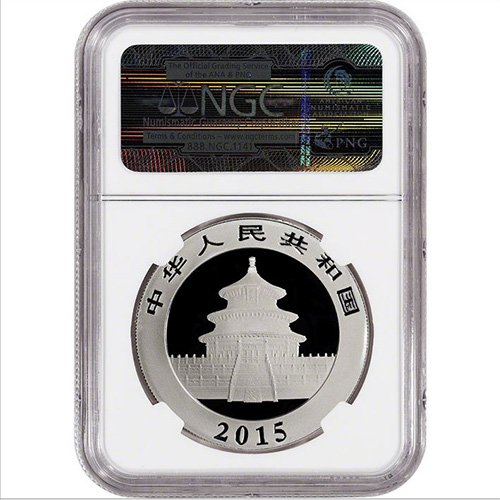 Each 2017 1 oz Chinese Silver Panda Coin offered from the Chinese Mint in this listing is available in near-perfect condition. A Mint State 69 coin exhibits full, original mint luster with a maximum of two minor detracting flaws. These flaws are limited in nature to minuscule contact marks or hairlines found only outside the primary focal areas of the coin.

Silver Panda coins from the Chinese Mint have a complex history. The coins actually debuted in 1983, but were originally only offered as proof specimens. The introduction of bullion coins in the Silver Panda series did not occur until 1989.

On the obverse of the 2015 Chinese Silver Panda is the image of the giant panda species of bears. In this design, used only in 2015, there is an adult panda featured sitting in front of a bamboo wall while it eats some bamboo. The giant panda gets 99% of its dietary sustenance from bamboo and other greens in the central highlands of China.

All Silver Panda coins are struck by the Chinese Mint, but feature no mint marks as bullion coins. The mint does not speak to the mints which handle the production, though it is assumed its primary facilities in Shenyang, Shanghai, and Shenzhen play a role in coining.

If you have any questions, please dont hesitate to ask. JM Bullion customer service associates are available to you at 800-276-6508, online using our live chat, and via our email address.