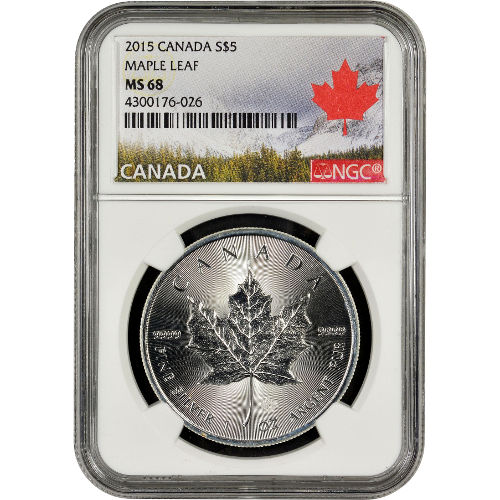 The Canadian Silver Maple Leaf was first introduced in 1988, nearly a decade after its gold counterpart made its first appearance. Today, it is one of the most sought-after coins in the global precious metals marketplace, and was the first to feature .9999 pure silver content. Now you can purchase a 2015 1 oz Canadian Silver Maple Leaf with NGC certification from JM Bullion.

In 2015, the Royal Canadian Mint rolled out a series of new micro-laser engraved security features on its Canadian Maple Leaf coins to deter counterfeiting. Both sides of the coin feature radial lines that are near-impossible to duplicate, while the reverse features a small maple leaf privy mark with the year of issue featured in its center. The year of issue is only available under intense magnification.

The 2015 1 oz Canadian Silver Maple Leaf coins available to you today are in MS68 condition according to the NGC. Coins in this grade have an attractive strike and full mint luster, but may contain three or four minor detracting flaws. These flaws are limited to minor contact marks and are found outside the primary focal areas of the coin.

On the reverse is the traditional image of a single sugar maple leaf. It is included with engravings that read Canada, the coins purity on both sides of the maple leaf, and the phrase Fine Silver 1 oz. Argent Pur along the bottom.

The Royal Canadian Mint was founded in 1908 in Ottawa, and began by processing gold and silver discovered in the Yukon Territories. Todays its capacity has grown to include a second, modern facility in Winnipeg, and allows the Mint to produce all Canadian coinage, as well as currency for other smaller nations.

If you have questions, JM Bullion associates are available at 800-276-6508, online through our live web chat, or via email.