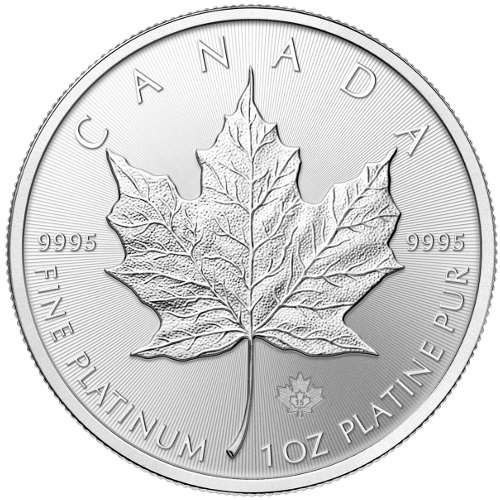 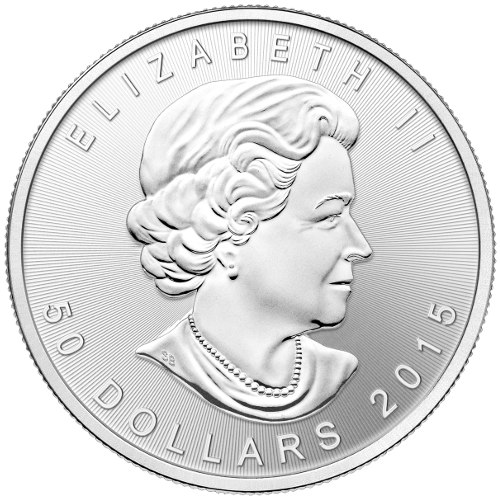 Please be aware that these coins ship in the exact condition as we receive them from the Royal Canadian Mint. We do not cherry-pick any coins for grading or purchase any second-hand material, so you can be sure the coins you receive will be in brand new condition and ship in mint-sealed tubes of 10. Non-mint lot quantities will ship in individual plastic flips.

Canadian Platinum Maple Leaf coins were reintroduced by the RCM in 2009, this time with only a 1 oz. coin available. Today’s Canadian Platinum Maple Leaf is struck using .9995 platinum and carries a face value of $50 (CAD). As with all other variants of the maple leaf coin, the platinum product features the maple leaf designed by the RCM engravers on its reverse, with Queen Elizabeth II’s portrait included on the obverse.

The reverse side of each 2015 1 oz Canadian Platinum Maple Leaf features the sharp image of a sugar maple leaf, as designed by RCM engravers in 1988. The image is surrounded by the engravings “Canada,” “Fine Platinum,” and “1 OZ Platine Pur,” as well as the purity of the coin on either side of the maple leaf.

On the obverse is Susanna Blunt’s 2003 depiction of Queen Elizabeth II in right-profile relief. Her image is surrounded by engravings that include “Elizabeth II,” the face value of the coin, and its year of minting.

The Royal Canadian Mint was established in 1908, and today is one of the finest facilities in the world. Operating coining machines in Ottawa and Winnipeg, the RCM has tackled everything from gold bars to support Britain’s World War I efforts to striking $1 million coins.

The 2015 Platinum Maple Leaf is initially launching on an allocation basis, so coin supply will be fairly tight for the time being. Platinum Maple Leafs are available in mint tubes of 10, or lots of less than 5 will ship in individual flips (lots of 6-9 ship in tubes).

If you have any questions about the Canadian Platinum Maple Leaf, a JM Bullion associate will be happy to answer them. We’re available on the phone at 800-276-6508, online using our live web chat, and via email.