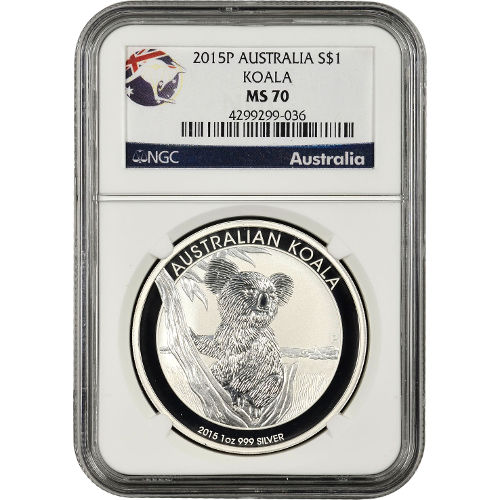 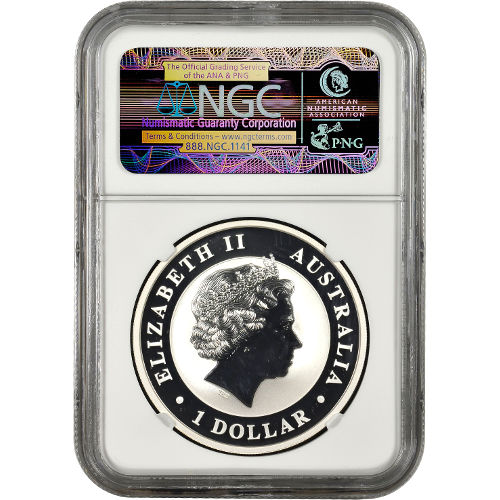 Often referred to as the koala bear and viewed as a docile creature, the koala is actually a marsupial that is capable of aggressive behavior when its safety is threatened. The koala is one of the most recognizable native wildlife species from Australia, and was a natural choice for the expansion of the Perth Mints wildlife-themed bullion coins.

Each 2015 1 oz Australian Silver Koala coin in this listing from JM Bullion has a Mint State 70 grade from the NGC. These coins are considered perfect specimens, with full, original mint luster and no detracting flaws of any kind.

The reverse bears the image of an adult koala sitting in the crook of a tree in the Outback. With its eyes fixed on an object in the distance, you can see the rolling grasslands in the middle ground give way to a rocky outcrop in the distant background.

On the obverse face is the image of Queen Elizabeth II. Created by Ian Rank-Broadley, Her Majestys right-profile portrait is surrounded by engravings that include Elizabeth II, Australia, and 1 Dollar.

The Perth Mint was founded in 1898 by the ruling British authorities as the third and final facility in the Royal Mint system. Since 1970, the facility has been controlled by the state government of Western Australia, and is a separate entity from the federal governments Royal Australian Mint.

Please direct any questions you have to a JM Bullion associate at 800-276-6508. You can also contact us online using our live web chat or by submitting questions via email.