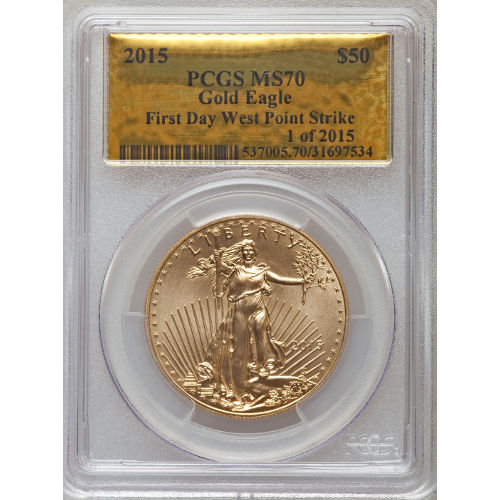 American Gold Eagle coins were introduced in 1986, following passage of the Gold Bullion Coin Act of 1985. During the first year of production, more than 1.5 million 1 oz American Gold Eagle coins were produced. Mintage levels have ebbed and flowed with time. Levels have peaked twice since the coins introduction. The first peak came around Y2K, when many people turned to gold coins. Another production peak occurred during the Great Recession in 2009 and 2010.

These 2015 1 oz American Gold Eagle coins include an MS70 grade from the PCGS. A coin with an MS70 grade is considered perfectly struck. The Gold Foil Label included inside the sealed packaging of this coin bears information such as the year of minting, face value, coin grade, grading service, and serial number for the 1 oz coins in this series.

On the obverse side of the American Gold Eagle is Augustus Saint-Gaudens depiction of Lady Liberty. In the image, first designed in 1907, Lady Liberty is featured with the setting sun in the background and Washington DC at her feet in the foreground. The reverse side bears the image of a family of nesting bald eagles, as designed specifically for this coin by sculptor Miley Busiek.

The United States Mint, one of the oldest facilities in the Western Hemisphere, uses its West Point Mint facility to produce the American Gold Eagle. On occasion, different mints are used to produce special-edition coins and sets.

If you have questions about the American Gold Eagle and the Gold Foil Label, JM Bullion associates welcome those inquiries at 800-276-6508, using our live web chat, and via email.