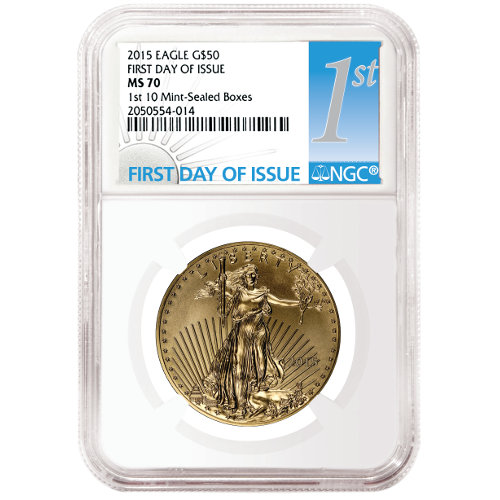 These coins are limited in quantity for a number of reasons, not the least of which is the timing of production. Each 2015 1 oz. American Gold Eagle available was struck on the first day of 2015 production for the coin series, and shipped from the US Mint in the first 10 boxes. Additionally, these coins received a Mint State 70 grade from the Numismatic Guaranty Corporation, signifying each coin as a perfectly struck bullion coin.

American Gold Eagle coins are the official gold bullion coins of the United States. The program was authorized by Congress in 1985 with passage of the Gold Bullion Coin Act, and the first coins were produced in 1986. Every year, the coins are struck in the 1 oz. weight, as well as three fractional weights: oz., oz., and 1/10 oz.

Augustus Saint-Gaudens is widely credited with revitalizing American coin design when he developed the Lady Liberty image used on the obverse side of the American Gold Eagle. Originally created in 1907, his depiction of Lady Liberty striding over Washington DC was first featured on the $20 Gold Double Eagle from 1907 to 1933. Sculptor Miley Busiek was commissioned in 1986 to create an image of the bald eagle for the coins reverse side. Her depiction features a family of nesting eagles.

The United States Mint operates four production facilities across the country. Of the four, the West Point Mint in New York is tasked with producing the bulk of American Gold Eagle coins each year. Certain special-edition coins in the series are struck at the Philadelphia Mint.

We encourage all numismatics to reach out to a JM Bullion associate with any questions about our products. You can reach our staff members at 800-276-6508, through our websites live chat service, and via email.