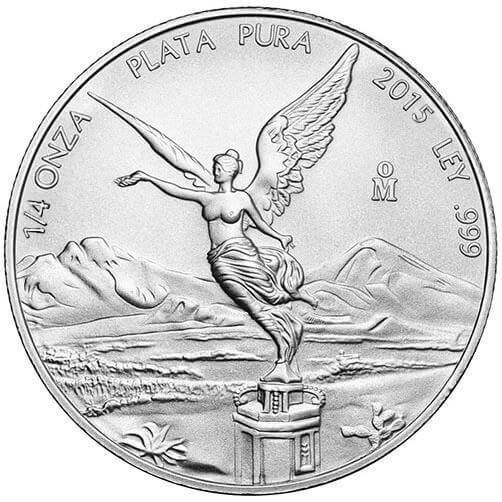 The Mexican Silver Libertad coin was first struck in 1982. Since its introduction more than 30 years ago, the Silver Libertad has experienced moderate demand and low mintage levels. Although demand is rising, mintage levels are not, making these coins difficult to find. Imagery used on the coin signifies the nations struggle for independence from Spain and its coat of arms.

Each year, the Mexican Mint produces seven weights for the Silver Libertad coin series. The largest coin in the series is the 5 oz Libertad, while the 1/20 oz coin is the smallest of the four fractional coins in the series. The designs used on the Libertad coins originated on the Centenario gold coin released in 1921.

On the obverse side of the 2015 1/4 oz Mexican Silver Libertad coin is the image of the Angel of Independence. Inspired by the statue erected in the center of Mexico City in 1920, the angels image sits in the foreground, with the Mexican volcanoes of Popocatepetl and Iztaccihuatl featured in the background.

The reverse side of the coin bears the national coat of arms for Mexico. In the design, a bald eagle sits atop a cactus with a serpent in its beak. The image is surrounded by a wreath and the phrase Estados Unidos Mexicanos.

Mexicos La Casa de Moneda de Mexico, or Mexican Mint, was first established by Spanish conquistadors in 1535 as they sought to exploit the wealth of Central America. Today, it is one of the oldest facilities in the world.

JM Bullion welcomes any question you may have about the Mexican Silver Libertad coins. Our associates are available on the phone (800-276-6508), online through live chat, and via email.