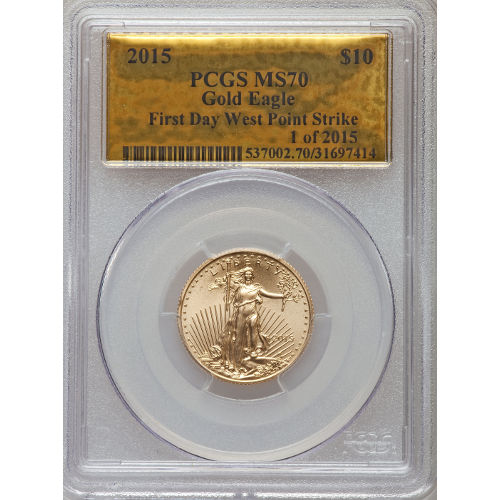 There are few coins in the world that grab the attention of numismatics like the American Gold Eagle. The coin, introduced in 1986, features a design first envisioned by Augustus Saint-Gaudens in 1907. One makes this coin so unique is the fact that it resurrects a design created during the height of Americas minting history, when designs were truly artistic. Today, you can purchase a 2015 oz American Gold Eagle coin from JM Bullion with a MS70 grade from the Professional Coin Grading Service.

American Gold Eagle coins are struck in 22-karat gold, compared to the 24-karat gold used in other national gold bullion coin programs. That has not damped the demand for the coin by investors and collectors around the globe. Saint-Gaudens, who died before his original $20 Saint-Gaudens Gold Double Eagle coin was ever struck, designed Lady Liberty at a time when American minting was entering its Golden Age. He was commissioned by President Theodore Roosevelt to help beautify Americas gold coins.

These 2015 oz American Gold Eagle coins come with a MS70 grade from the PCGS, which means that each coin is considered perfectly struck by the mint. The Gold Foil Label inside the packaging of each coin bears information such as the face value, year of minting, coin grade, grading service, and an individual serial number for the coin. The oz coin has long been one of the more popular coins in the series, though its production levels usually trail those of the 1/10 and 1 oz coins.

On the obverse side of each coin is Saint-Gaudens Lady Liberty. Featuring a torch in one hand and an olive branch in the other, she is walking forward with the setting sun at her back and Washington DC at her feet. The reverse side features the image of a male eagle returning to a female and hatchlings in the nest, as designed by sculptor Miley Busiek.

The United States Mint strikes the majority of American Gold Eagles at its West Point Mint facility in New York. Certain special-edition coins are struck at other facilities, namely the Philadelphia Mint.

We encourage all of our shoppers to contact us with questions. JM Bullion associates are available at 800-276-6508, online using our live web chat, and via email.