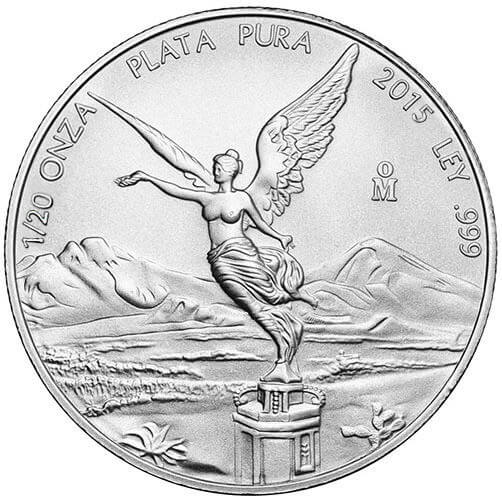 The official Banco de Mexico packaging guidelines for this product are“Bags with 50, 100, or 200 coins.” Due to the ambiguity we can’t guarantee mint package size at this time.

While some sovereign silver coin programs mint only a few different weights, the Mexican Silver Libertad is struck each year in seven different weights. These weights include three full-weight coins and four fractional-weight coins. Among the most difficult to find, due to low mintage levels, are the coins at either end of the spectrum. On average, the 1/20 oz Silver Libertad has the lowest mintage, making it the rarest coin in the series each year.

The designs used on Silver Libertad coins date back to the nations celebration of its War of Independence. In 1920, a statue of the Angel of Independence was commissioned and constructed in Mexico City to commemorate the centennial anniversary of the wars opening battles. The full-length image of the winged angel is featured on the obverse side of the coin.

Along with the image of the Angel of Independence atop a pillar, the obverse side of the coin bears imagery of two of the nations famous volcanic peaks. Engravings on this include the weight and metal content of the coin, as well as its purity and mint mark. The reverse side includes a depiction of the Mexican coat of arms. In the image, a bald eagles struggles against a serpent that it clutches in its talons and beak.

The Mexican Mint, or La Casa de Moneda de Mexico, is a decentralized agency within the federal government of Mexico. Founded in 1535 by the ruling Spanish, it is the oldest facility in the Americas.

JM Bullion is dedicated to customer service. If you have questions about Mexican Silver Libertad coins before buying, dont hesitate to contact a staff member at 800-276-6508, connect with us via our web chat, or send us an email.